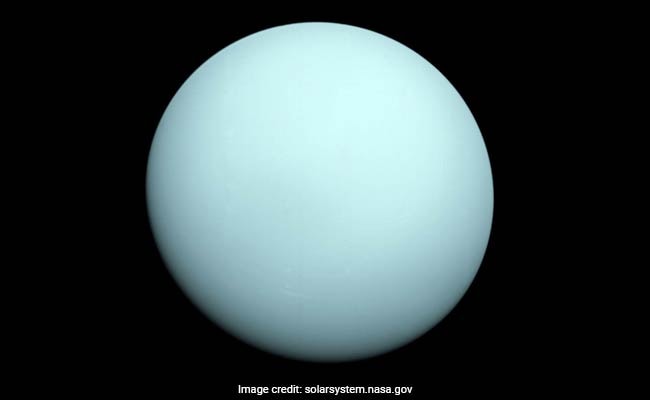 A key committee of scientists have recommended the US National Aeronautics and Space Administration (NASA) to prioritise a science mission to the seventh planet of our solar system – Uranus.

According to BBC, Uranus is a mostly unexplored world as NASA’s only visit to the “ice giant” was Voyager 2’s brief fly-by back in 1986. Uranus orbits the Sun 19 times further out than the Earth. And the scientists, during the Voyager 2 probe, discovered some of the planet’s rings and moons.

Now, as per the media outlet, an influential panel of scientists believe that an in-depth study of Uranus can help them better understand the many similarly sized objects now being discovered around other stars. In a document, known as the “decadal survey”, published by the US National Academies of Science, Engineering, and Medicine (NAS), the team summed up what the American research community thinks are the big planetary science questions right now and the space missions required to answer them.

In the new report, they highlighted a mission concept called the Uranus Orbiter and Probe (UOP) for a multi-year orbital tour during which it should jettison an atmospheric probe. The researchers called Uranus “one of the most intriguing bodies in the solar system”. BBC reported that there are favourable launch opportunities in 2031 and 2032 that would allow a spacecraft to use a gravity slingshot around Jupiter to shorten the cruise time to Uranus to just 13 years.

Dr Robin Canup from the Southwest Research Institute in Boulder, Colorado, who was the co-chair on the Academies’ steering committee, has said that the “ice giant” was a worthy target for a NASA flagship as the Uranus mission was the “most mature technically”. “It was the only one to receive a low-medium rating for its risk,” she explained, as per BBC.

“So because of that, we are extremely excited to recommend that the highest priority new flagship should be a Uranus orbiter and probe. This will be a fantastic multi-year mission with the probe dropping into the planet at the beginning of the mission, followed by an extended orbital tour investigating the satellites, their interiors, the magnetosphere, the rings, and the atmosphere,” Dr Canup added.

Further, Dr Robin Canup informed that the UOP is technically ready to start now. The researchers recommended that the mission be initiated in the financial year 2024. Moreover, the European-based planetary researchers are also hoping that the European Space Agency (ESA) contributes to such a mission. As for NASA, the speed at which it is able to implement the recommendation will depend on its other financial commitments.

Meanwhile, it is to mention that the UOP mission will cost around $4.2 billion, according to Space.com.

After hijab row, what’s the Bible storm that has rocked Karnataka school?

2022 Laureus Sportsperson of the Year winner is...