Make-In-India For The World: India To Export 3 Batteries of BrahMos Supersonic Cruise Missiles To The Philippines

In a major boost to India’s defence capability building prowess, the Philippines on Friday has accepted BrahMos Aerospace to supply Shore-Based Anti-Ship Missile System Acquisition Project for its navy.

The proposal is worth $374,9 million. The Notice of Award has been communicated to BrahMos officials by the Philippines Department of National Defence.

The Indian Navy and the Defence Research and Development Organization (DRDO) successfully tested the BrahMos Supersonic Cruise missile this week, on January 11.

The development comes in the backdrop of the government’s push for Make in India in defence sector. Earlier, lauding the development, Defence Minister of India Rajnath Singh said the robustness of Indian Navy mission readiness is reconfirmed after the successful launch of the advanced version of BrahMos Missile from INS Vishakhapatnam. 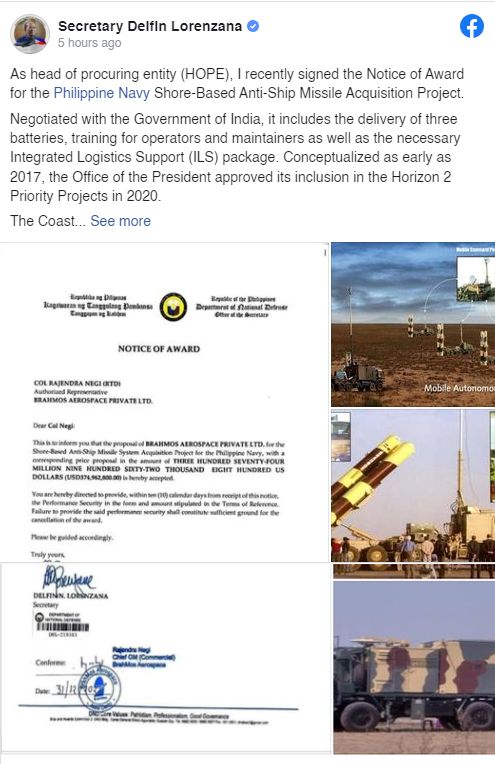 As head of procuring entity (HOPE), I recently signed the Notice of Award for the Philippine Navy Shore-Based Anti-Ship Missile Acquisition Project.

Negotiated with the Government of India, it includes the delivery of three batteries, training for operators and maintainers as well as the necessary Integrated Logistics Support (ILS) package. Conceptualized as early as 2017, the Office of the President approved its inclusion in the Horizon 2 Priority Projects in 2020.

Ghazipur Bomb Seizure: IED May Have Been Dropped In Punjab And Kashmir By Pakistani Drones

Uzbekistan Reacts to the Crisis in Kazakhstan – The Diplomat

‘No curb on use of PM’s name, photo and emblem for PM CARES Fund’

In DDA budget, focus on Dwarka, Narela and Rohini

2 More House Democrats Say They Will Not Seek Reelection