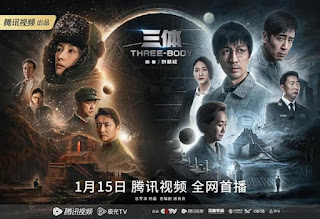 Preparations for the series began seven years ago, with the crew closely consulting with science and technology experts and sci-fi specialists. Many scenes were shot on the grounds of prominent Chinese scientific institutes.

According to previous reports, the team worked on the script for four years and spent 126 days shooting, traveling to many places like Ningbo, Hengdian, Beijing and Heihe to film, and creating more than 270 film sets, to precisely reenact details of the original book.

The plot of the TV adaptation will revolve around physicist Ye Wenjie’s contact with an extraterrestrial civilization known as the Trisolaran and the subsequent centuries-long clash between them and humans. A trailer was also released on Thursday, showing iconic figures like Ye, Wang Miao and Shi Qiang, and famous scenes adapted from the book.

Several movie and TV adaptations of “The Three-Body Problem” have been in development since 2015 and have been closely followed by fans. Its multimedia adaptation rights holder Yoozoo Group even set up a new company, Three Body Universe (Shanghai) Cultural Development Co., Ltd., to manage the business. However, the results have been lackluster so far. A Chinese movie adaptation by Zhang Fanfan starring Feng Shaofeng and Zhang Jingchu was shot but shelved. Moreover, Chinese video streaming giant Bilibili entrusted YHKT Entertainment to make an animation series and release it in early December 2022; however, it received mixed reviews.

“The Three-Body Problem” is also set to receive a Netflix adaptation, produced by David Benioff, D.B. Weiss and Alexander Woo, with the first episode directed by Hong Kong director Derek Tsang. China’s top animator, Tian Xiaopeng, will also direct a new live-action film based on the novel. However, further details and release dates are yet to be announced.

The Chinese TV adaptation, “Three-Body,” will be the first live-action production based on the novel to be released. It will be broadcast on China Central Television’s TV drama channel CCTV-8 and online platforms of Tencent Video and Migu Video at 9:00 p.m. on Jan. 15, as well as Tencent Video’s overseas service WeTV.

WPI inflation cools to 22-month low of 4.95% in Dec as food prices fall