Kuki-Chin Refugees From Bangladesh Take Shelter in Mizoram – The Diplomat 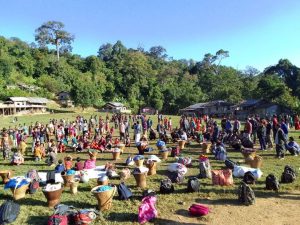 Hundreds of refugees have again landed in India’s northeastern state of Mizoram from Bangladesh following an intensive operation by Bangladeshi security forces against militants.

A senior Indian government official has confirmed that around 270 refugees, including women and children, have crossed the border at Lawngtlai near the trijunction of India, Myanmar and Bangladesh in south Mizoram.

The development comes close on the heels of a similar exodus from Myanmar into the border state since around the middle of last year after the military coup in February 2021 and the ensuing conflict that erupted between the military junta and resistance groups resulting in the displacement of thousands of people from their homes.

In Bangladesh, the unrest unfolded at Bandarban and Rangamati in the Chittagong Hill Tracts (CHT) after the Rapid Action Battalion (RAB) launched an operation last month against the Kuki-Chin National Army at Cheikhiang, Phainumpara, Sunsawngpara and a few neighboring villages. The outfit has a support base among the Kuki-Chin communities and especially the Bawm that inhabit these villages.

The refugees are currently putting up near Simnasora and Bandukbanga villages in Mizoram’s Chawngte subdivision near the India-Bangladesh-Myanmar trijunction. Local residents were accommodating them at a primary school and church and also providing them with food. The Mizoram-based Zo Reunification Organisation (ZoRo) has condemned the operation and the atrocities committed on civilians in Bangladesh.

Also known as the “Bawm Party,” the group came to the forefront last April after it gunned down a man in Bilaichhari.  Two months later, the KNF claimed responsibility on social media for killing three members of another outfit on June 21. There are reports claiming that the outfit has forged ties with rebel groups in India’s northeast and Myanmar.

A source in Dhaka familiar with the current developments in the CHT pointed out that the rebel group’s ‘cross-border activities’ had been under the scanner of the security agencies in Bangladesh for the past several months. “The security forces decided to crack the whip after the group allegedly struck an agreement with a radical Islamist group. Many aspects in the episode are still murky,” he claimed.

Last month, a spokesperson of the Rapid Action Battalion (RAB) told the media that 10 militants and separatists had been arrested in the operation, including seven members of the newly launched militant outfit Jama’atul Ansar Fil Hindal Sharqiya and three from the KNF in the CHT.  Nine guns, 50 rounds of bullets, 62 cases, six bombs, two cartridge belts, and a locally made pistol along with other equipment and jihadi literature were also seized during the exercise.

The spokesperson added that those arrested confessed that they had firmed up an agreement with KNF to provide them shelter and training in exchange for money. He claimed that more than 50 militants were being trained at the camps in the region.

Bangladesh’s CHT is home to a dozen Buddhist and Christian ethnic groups collectively known as the Jumma people.  The emergence of the KNF and its alleged linkages with an Islamist group has added another layer of complexity in a region that has been simmering with unrest for the past several decades owing to a combination of many factors.

There were earlier occasions when the conflict in the CHT impacted India’s northeast.   In the 1990s, Chakma refugees were compelled to cross over and stay in Tripura for several years till 1997 when an agreement was signed between the Bangladesh government and the Parbatya Chattagram Jana-Samhati Samity.

Different sections of society are articulating diverse opinions on what is unfolding in the CHT and how it has sent members of the Kuki-Chin community scurrying for safety to Mizoram.  Some functionaries of civil society groups in Mizoram are of the view that the reports of linkages between the KNF and an Islamist outfit are a ‘baseless allegation,’ which was cooked up to justify the operation meant to achieve different goals that could also be linked to the turmoil in Myanmar.

Why India’s Defence Sector Is Booming

Will India Be Affected by Delays of Arms Imports From Russia? – The Diplomat