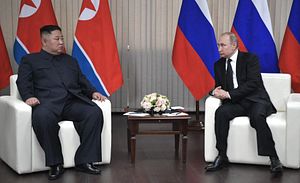 KCNA did not elaborate on the letters or their contents. However, Kim might have asked the recipient leaders to form closer ties with his country in his letter, while criticizing “the U.S. imperialism” in the region. He has made no secret of the North’s goal to be a stronger nuclear-weapons state to confront the strengthening alliance of the United States and South Korea in the region.

Other cards went to leaders from Cuba, Vietnam, and Laos, as well as Bashar al-Assad of Syria.

As North Korea is expecting to fully reopen its borders with China this year, Kim will put more efforts toward reviving his country’s sluggish economy, which has been harshly impacted by the COVID-19 pandemic in the past three years. Although it is unclear how much the North’s economy can be resuscitated under the current U.S. and U.N. sanctions, Kim may reach out to anti-U.S. nations to seek avenues for economic cooperation. Given its attempts to evade sanctions, North Korea will likely activate unofficial channels for earning foreign currency while remaining highly dependent on China’s economic pipeline.

Considering Pyongyang’s desire to grow its economy, Washington and Seoul’s offers of the potential economic benefits of dialogue could work to bring Pyongyang back to the negotiating table. However, Pyongyang has shown no interest in renewing the deadlocked nuclear talks since Kim witnessed then-U.S. President Donald Trump’s brinkmanship in Hanoi in 2019. For Pyongyang, returning to the table can be considered only after Washington and Seoul preemptively make dovish overtures such as lifting economic sanctions or halting demands for the “complete, verifiable, and irreversible denuclearization” of North Korea – which is off Washington’s table at this stage.

While working on boosting the country’s plan for economic development, North Korea will likely keep its belligerent stance against South Korea and the U.S. by escalating tensions in the Korean Peninsula this year.

Following Kim’s ambition to “exponentially” increase his country’s nuclear arsenal, North Korea kicked off its missile tests on the first day of the year, validating concerns over the North continuing its missile threats toward the South and its allies in the region.

As North Korea already spent overwhelming resources on its unprecedented number of missile tests last year, it is unlikely to pursue a similar course this year. However, as Kim pledged weeks ago, North Korea will showcase its military technologies by testing more advanced missile programs, such as a military reconnaissance satellite and solid-fuel intercontinental ballistic missile (ICBM). Regardless of the current missile technologies North Korea possesses, Pyongyang’s consistency on missile developments will keep cornering Seoul and Washington as it is steadily raising the ante for future negotiations. The more new and powerful nuclear weapons North Korea produces, the higher the price South Korea and the U.S. would need to pay for disarmament.