Seems like Bollywood diva Kareena Kapoor Khan is making the most out of her weekend, as she cherished some family time with her parents and sister Karisma Kapoor at her father Randhir Kapoor’s house in Bandra, Mumbai. Bebo took to her Instagram handle and posted a picture in which she can be seen posing for a perfect family picture with her father- Randhir Kapoor, mother- Babita Kapoor and sister Karisma Kapoor. Sharing the picture, she wrote, “My World,” with a red heart emoticon in the caption.

Earlier in the morning, Kareena, who is one of the most active social media celebrities, shared an adorable picture with her son Taimur Khan. The selfie features Kareena donning a white T-shirt that says, “Heart Breaker” as she posed with her son making cute expressions in the picture. Alongside the snap, Bebo wrote, “What’s on my t-shirt Tim? You,” with red heart emoticons. 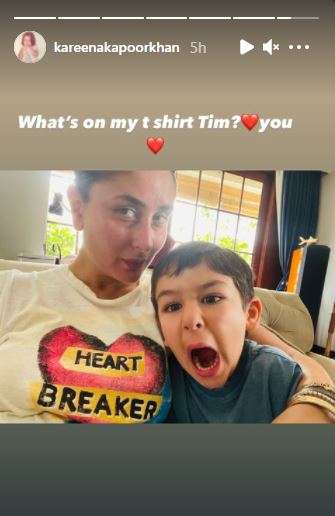 Meanwhile, on the work front, Kareena, who recently launched her book ‘Pregnancy Bible’, is all set to make her debut as a producer with director Hansal Mehta’s yet-to-be-titled thriller. She will also act in the film and will be co-producing it with Ekta Kapoor. Kareena will also be seen in ‘Laal Singh Chaddha’, which reunites her with Aamir Khan, who last worked with her in ‘3 Idiots’. Apart from Kareena, Mona Singh will also be seen in the movie.

On the personal front, Saif and Kareena, who are fondly called Saifeena by their fans, had tied the knot in December 2012. Their first son Taimur Ali Khan was born on 20 December 2016 and their second son Jeh was born on February 21 this year.