Japan Braces For Sixth Wave Driven By Omicron  – The Diplomat

The spread of the new Omicron variant is on the rise and authorities are bracing for a worst case scenario. 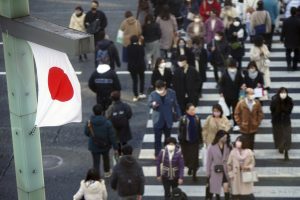 People wearing protective masks to help curb the spread of the coronavirus walk along a pedestrian crossing near a Japanese flag Wednesday, Dec. 29, 2021, in Tokyo.

Japanese authorities are on high alert for the Omicron variant of COVID-19 after the first case of community transition was detected in a family with no travel history last week in Osaka. New cases of Omicron have spread beyond major cities, emerging in Okinawa, Hiroshima, Fukuoka, and Aichi as well as Osaka, Kyoto, and Tokyo.

Across Japan the rate of new infections had fallen to a record low since the pandemic began, baffling experts. But the number of new daily cases have been edging upward more recently. The Omicron variant is believed to be highly transmissible than the Delta strain but may cause only mild to moderate symptoms. However, as travel picks up during the New Year holidays there are concerns that community spread could accelerate.

Prime Minister Kishida Fumio told reporters last week that the country is prepared for a domestic outbreak. Japan has gained a reputation with some of the world’s strictest border restrictions and has introduced 14-day quarantine at designated facilities for people deemed to be a “close contact” of an infected person. Additionally, the government will begin administering a newly approved COVID-19 antiviral pill next week and aims to expedite the rollout of booster shots “as much as possible” for the general population, with health professionals currently receiving their third dose followed by the elderly in March.

Kishida has taken a politically sensible approach saying “we will assume the worst and implement the greatest possible measures,” explaining that “it is better to do too much than too little.” But a government health advisory panel warned of a rapid spread of infection and the need to reinforce the medical system. Omicron may account for 90 percent of the cases in Osaka by mid-January according to projections presented by the panel. The expert panel urged the government to switch focus from border restrictions to domestic measures.

The government has set aside 66,000 rooms for asymptomatic cases and those with mild symptoms of Omicron. People deemed to be “close contacts” will also be asked to quarantine at designated facilities with some exceptions for home isolation. However, there are concerns that the number of people in close contact will overflow as the virus gains momentum in Japan. The accommodations are organized by municipal and local governments which are facing increased pressure with incidents where as many as 1,000 people were deemed to be in close contact from an aircraft requiring quarantine. The government has since relaxed the definition of a “close contact” to passengers seated within five rows of a person infected with COVID-19.

Meanwhile, Kono Taro, the minister previously in charge of the vaccine rollout, criticized the pace of the booster shot distribution in light of the spread of Omicron. He urged the prime minister to consider speed over fairness and said the country cannot wait eight months for boosters to be more widely available.

The detection of the Omicron variant in South Africa in late November prompted the government to reinstate strict border restrictions barring foreign travelers and all new visa holders from entering Japan. The move, which does not affect Japanese nationals, attracted little domestic opposition. A Kyodo public opinion poll conducted after the announcement found that 90 percent of respondents were in favor of the border closures. The restrictions were initially set to expire at the end of December but have been extended “until more is known about the Omicron variant.”

The U.S. military forces in Japan have come under fire for their sloppy COVID-19 testing after it found that the U.S. did not conduct PCR tests before flying personnel to Japan. This month clusters of COVID-19 have been detected at several U.S. military bases in Japan, which include cases of the Omicron variant, undermining the government’s current COVID-19 border restrictions.

Kishida posted a New Year holiday video message on social media calling on people to maintain the usual precautionary measures such as wearing masks, avoiding densely packed crowds, and hand washing. He also said while the country had spent a lot of time dealing with the pandemic, there are signs of a “bright future” ahead.

Tips and Tricks to keep your home virus free

Planning to Start a Family After Covid-19 Recovery? Know What Experts Think

6 things you need to stand out on a video call