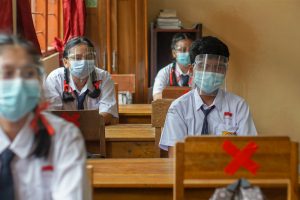 Schoolchildren wear face shields and masks in class during a COVID-19 outbreak in Bali, Indonesia, on May 18, 2021.

Children in the Indonesian capital Jakarta will today return to school after 18 months of studying from home, as the country’s government begins to ease restrictions in areas of the country hard-hit by COVID-19.

Over the past four months, Southeast Asia’s largest nation has been pummeled by the virulent Delta strain of the coronavirus, but cases are gradually beginning to fall as the government’s vaccination rollout gathers pace.

President Joko “Jokowi” Widodo announced on August 23 that restaurants and places of worship in these regions would be able to operate at 25 percent capacity, while shopping malls would be permitted to operate at 50 percent of their usual capacity.

“Since July 15, cases have fallen 78 percent. The recovery rate is also higher than new positive cases,” Jokowi told a press conference. “Seeing that several indicators are starting to improve, the government will consider making gradual adjustments to some restrictions.”

The partial reopening also spells an end to the school shutdown that was imposed in the Indonesian capital in March 2020. According to The Guardian, 610 schools in Jakarta are ready to start face-to-face schooling today, although they will still be under considerable restrictions. Classes will be limited to half their usual size, and will only be held on Mondays, Wednesdays, and Fridays. On the remaining days, the classrooms will be sprayed with disinfectant in order to prevent further COVID-19 outbreaks.

“The teachers, students and parents are excited with this new policy because we haven’t studied in class for a very long time,” Nidia Khaofiya, an elementary school teacher from East Jakarta told The Guardian.

It also reflects the progress made in the Indonesian capital. Yesterday, Jakarta recorded 474 new cases of COVID-19, just a small fraction of the 14,600 infections that it recorded on July 12. This has partially resulted from the rapid rollout of vaccines in the capital, which has the highest vaccine coverage in the nation. The Guardian reports that 9.8 million people have received at least one dose of vaccine, 5.6 million of whom have received two doses.

Yet the country is far from out of the woods. Among the most concerning trends is the high rate of COVID-19 deaths among children. Those under 18 years of age make up 1 percent of the nation’s deaths from the disease, compared to the worldwide average of around 0.3 percent, as reported by UNICEF. According to Sky News, COVID-19 killed a record number of Indonesian children in August, with at least 228 people aged under 18 recorded by the Ministry of Health.

While case numbers continue to ease in the former virus epicenters on densely populated Java and Bali, they continue to rise or hold steady in outlying parts of the Indonesian archipelago, where the limited medical infrastructure is more liable to be overwhelmed by outbreaks. The vaccination rollout in far-flung regions also lags far behind Java and Bali, which have been given priority access to vaccines, given the serious outbreaks that ravaged these regions.

Indonesia now faces a danger common to many nations with limited resources: namely, that action taken to depress the COVID-19 outbreak will simply displace the virus to other, less prepared regions of the country. Either way, for all its progress over the past few months, it is much too early to declare that Indonesia’s deadly dance with COVID-19 is at its end.

FDA confirms vaccines donated by Czech Republic will be viable until Feb. 2022