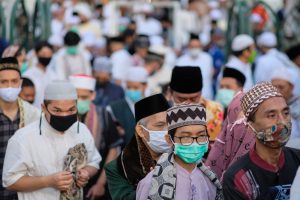 Indonesians wearing face masks leave a mosque after Eid prayers in Malang, East Java, on May 24, 2020.

Earlier this week, Indonesian health authorities announced that they had detected the country’s first locally transmitted case of the Omicron COVID-19 variant. According to health ministry official Siti Nadia Tarmizi, the first confirmed case was a 37-year-old male from the city of Medan in Sumatra who had visited a restaurant in central Jakarta earlier in the months, Reuters reported.

“With this one local transmission we will toughen mobility restrictions, especially during the Christmas and New Year’s holidays,” she told reporters.

On December 27, the government increased the number of PCR tests for people entering the country from one to three and President Joko Widodo has urged people not to slacken their adherence to health protocols. As of Wednesday, the Indonesian Ministry of Health had confirmed that there were 68 cases of COVID-19 infection from the Omicron variant, most of them detected in travelers returning from Saudi Arabia and Turkey.

Since it was first detected last November, the new fast-spreading coronavirus variant has now been detected in nearly every Southeast Asian nation, and threatens to upend the progress of recent months, during which most of the region’s governments have finally contained the virus after devastating outbreaks across the middle of 2021.

Indonesia is a case in point. At the height of its last peak in July and August, the country was recording upward of 50,000 confirmed infections per day, and has now seen more than 4.2 million total infections – the highest in Southeast Asia. Due to mobility restrictions, targeted lockdowns, and vaccination campaigns, that number has since dropped into the hundreds. Yesterday, the country recorded just 189 new cases and seven deaths from COVID-19.

But Omicron poses a serious risk of relapse. The country has fully vaccinated just 41 percent of its population, most of them in the large population centers, and given the outbreaks that are sweeping across many Western nations, including the United States, is likely to see COVID-19 make a comeback in the coming months. To take one example, Australia, a nation with considerably less population density and a more robust health system, and with vaccination rates nearly twice as high, is seeing runaway outbreaks driven by the Omicron variant.

Having only recently emerged from the deadly outbreaks of July and August, Indonesian authorities are clearly aware of the risk. Shortly after Omicron was detected in South Africa, Indonesia introduced a 14-day quarantine requirement for any nationals who have traveled to any of the 11 countries deemed at high-risk for Omicron, and raised its quarantine requirement for all arrivals from three to seven days. These have since been extended to Norway, Denmark, and the United Kingdom, all of which are seeing surges of the Omicron variant, while Hong Kong has been removed from the list.

Indonesian health authorities now optimistically anticipate that Omicron infections will peak at end of January, Health Minister Budi Sadikin said Tuesday. He said that after the peaks of 2021, “we are now more prepared if the next wave really comes,” and said the country had stockpiles of medication, more hospital beds, and medical oxygen.

However, the ultimate severity of the Omicron wave, if it comes to Indonesia, will likely depend on vaccination levels. The government is planning to begin distributing booster shots in January, beginning with health workers, support staff at health facilities, the elderly and beneficiaries of healthcare and social security subsidies. But with around half the population still unvaccinated – in large part due to the challenges the government faces in securing adequate supply – the country faces a turbulent start to 2022.

The Year in Review – The Diplomat