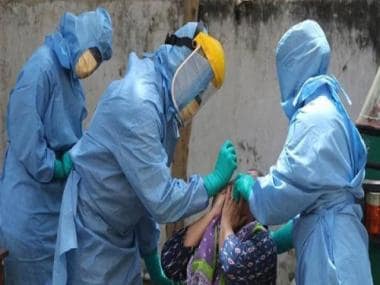 India registered 90,928 fresh COVID-19 cases in the past 24 hours ending at 9 am on Thursday, up nearly four-fold since the start of the year, mostly from cities where health officials say the Omicron variant of the coronavirus has overtaken the Delta.

The country has 2,630 cases of the Omicron variant – the most in Maharashtra with 797 cases, followed by Delhi with 465 cases.

The bulk of those infected have shown no or only mild symptoms and have recovered quickly at home, officials said.

Thirteen fatalities due to the pandemic were also reported in the state since previous evening. The active cases in the state stood at 1,14,847.

The case fatality rate in the state is 2.08 percent.

As per the Brihanmumbai Municipal Corporation, 20,181 new cases were reported in Mumbai alone, a fresh all-time high daily count and up 5,015 from a day ago, while four more patients succumbed to the infection.

With these additions, the financial capital’s coronavirus tally jumped to 8,53,809, while the death toll climbed to 16,388, the BMC said in a bulletin.

On Wednesday, Mumbai had logged 15,166 new coronavirus infections, surpassing the previous all time-high of 11,163 logged in April 2021 during the second wave of the pandemic.

As many as 10,860 cases were reported in the metropolis on Tuesday.

Delhi Health Minister Sayendar Jain on Thursday said the COVID-19 situation in the city does not warrant a lockdown yet, even as the national capital added over 15,000 new cases and the positivity rate mounted to 15.34 per cent.

He, however, said the city has not reported any death due to the Omicron variant so far.

Delhi has logged 29 deaths due to the disease since it reported the first case of the new variant on 5 December.

Jain asserted Delhi is in a comfortable position in terms of hospital bed occupancy. He said the number of cases in Delhi is high as a large number of people are being tested for the infection.

Authorities conducted around 90,000 tests on Tuesday and around 98,000 tests on Wednesday in the city, according to government data.

A few healthcare workers in Delhi have tested positive for COVID-19, but the number is not alarming, the minister said in response to a question.

Asked if the AAP government was considering a lockdown in the city, Jain said Delhi has already taken stringent actions, including imposing night curfew and weekend curfew, which are sufficient for the time being. “There is no need for a lockdown right now,” he said.

The minister reiterated that hospital bed occupancy and severity of infections is very less this time. “Not a single Omicron-infected patient has so far required oxygen,” he said.

The state’s coronavirus death toll rose to 19,846 as 19 more patients succumbed to the infection, it said.

Kolkata registered the highest number of new cases at 6,569, followed by 2,560 in neighbouring North 24 Parganas district.

The state has tested over 62,413 samples for COVID-19 since Wednesday, taking the total number of such clinical examinations to 2,16,69,865.

Meanwhile, a total of 125 passengers on a Milan-Amritsar charter flight were found to be Covid-positive when tested on arrival, government officials said on Thursday.

According to Airport Director VK Seth, there were a total of 179 passengers on the charter flight that landed at the Amritsar airport around 11.30 am on Thursday.

Since Italy is one of the “at risk” countries according to the Union Health Ministry, all eligible passengers – 160 in this case – were tested for COVID-19 and 125 of them were found to be positive, they mentioned.

Out of total 179 passengers, 19 were children or infant so they were exempt from on-arrival RT-PCR testing, they said.

The charter flight YU-661 between Milan in Italy and Amritsar in Punjab was operated by Portuguese company EuroAtlantic Airways, they mentioned.

The Amritsar airport authorities stated on Twitter that they have taken all necessary actions to stop the spread of COVID-19.

“In today’s flight all 125 pax tested positive, are being attended by state health officials. Rest 35 pax tested negative have been advised self monitoring and would be under supervision,” the airport noted.

Speaking on the preliminary studies indicating that the wave of Omicron appears to be milder, a leading Indian-origin scientist from the University of Cambridge warned on Thursday that the reduced severity of the new variant is the result of an “evolutionary mistake” and does not indicate that the virus is becoming less virulent.

Ravindra Gupta, Professor of Clinical Microbiology at the Cambridge Institute for Therapeutic Immunology and Infectious Diseases (CITIID), led a recent study on the Omicron variant and was among the first globally to describe the modified fusion mechanism of cells at play which might make Omicron more visible to the body’s immune defences.

While the study showed that the new variant, dominant in the UK and now sweeping parts of India, is infecting the cells found in the lungs less, the virus itself is not intending to become milder.

“There is this assumption that viruses become more benign over time but that’s not what’s happening here because those are long-term evolutionary trends,” Prof. Gupta told PTI in an interview.

“SARS-CoV-2 (COVID-19) does not have that issue because it is transmitting very efficiently so it doesn’t have any reason to become milder, especially in the era of vaccination with plenty of susceptible hosts. So that’s why I think it’s an evolutionary mistake. It’s not something intentional that the virus is trying to do to change its biology,” he explained.

“This finding of reduced severity with Omicron is obviously good news for now but the next variant that comes, and there will be one, will not necessarily have these characteristics and could go back to the severity that we’ve seen before.

“And, in fact I think it probably will… Therefore, blocking infection is a potentially desirable thing to do rather than what I’ve heard, which is people seeing this as a natural vaccine. That is an understandable but dangerous thing to do because we don’t understand the comildmplete implications of different variants on our health,” he said.