India, Israel, US, UAE – The Diplomat 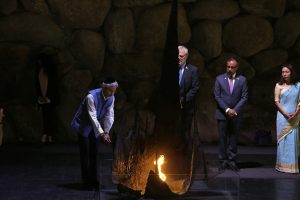 Even as one Quad finds its feet in the Indo-Pacific, a new quad is arriving in town. Late last month, foreign ministers from India, Israel, the United Arab Emirates and the United States came together to form what they called an “international forum for economic cooperation.”

In the aftermath of last year’s historic Abraham Accords between Israel and the UAE, facilitated by the U.S., the forum was a natural progression for three of its four participants. The odd inclusion was India.

For years, India has maintained an arm’s length from geopolitical alliances, particularly in fractious and volatile regions such as the Middle East. Its foreign policy has focused more on narrow bilateral transactions – building trade, wooing investment and finding areas for mutual capacity-building with individual countries, rather than seeking to build multilateral alliances. It was an approach meant to help India navigate fissures in global geopolitics by sidestepping participation in warring blocs. But it also meant that India enjoyed little influence or presence in important geopolitical debates because it opted out of them.

In the aftermath of its bloody border clashes with China last year, much of this began to change: India first made an exception by reviving the Quad and trying to find common ground with other countries seeking to counterbalance China in the Indo-Pacific.

Now, by venturing into a potential alliance in the Middle East, New Delhi has made a rather unprecedented decision to find common cause with the U.S. and its bloc of allies more broadly outside the Indo-Pacific. In his brief comments at the virtual meet with counterparts from Israel, the U.S. and the UAE, India’s foreign minister Jaishankar said, “The three of you are among the closest relationships we have, if not the closest.”

Forging multilateral forums around the world is a wise proposition for India. It would help India insert itself more purposefully into regional dynamics outside its own neighborhood, cultivate allies who share common interests, and thereby give New Delhi the opportunity to expand its global influence.

Yet, so far, India has remained largely cautious in how it goes about this. In both the Indo-Pacific as well as the Middle East, it has pushed for collaboration on non-military fronts: trade, infrastructure, vaccines and so on. In the wake of the pandemic, this strategy has shown great value – especially in the Indo-Pacific Quad, where India, Japan, Australia and the U.S. have managed to find a synergy between their comparative advantages, to work on delivering vaccines rather than confronting China militarily.

But the Middle East will be a far trickier affair. While the Indo-Pacific has had robust non-military ties amongst its countries for decades, the Middle East is far more fractious and conflict-driven – flush with both lucrative oil wealth as well as militias fighting proxy wars.

In Southeast Asia, trade and investment ties have largely flourished between China and its neighbors for several years, despite long-standing disputes and differences. In the last 24 years, for instance, trade between China and Vietnam has grown at over 20 percent each year, despite bitter conflicts over the South China Sea.

But in the Middle East, ties break down routinely over geopolitics. Just this week, four Gulf states, including the UAE, pulled their diplomats out of Lebanon in yet another spiraling face-off, after a Lebanese minister criticized the Gulf’s intervention in Yemen. Troubles have long simmered between those countries, owing to the influence of the Iranian-backed Hezbollah in Lebanese politics. In the new grouping that India is now a part of, all three of its partners have prominent rivalries with Iran. Indeed, the Abraham Accords themselves – which have allowed for this grouping to come together – were driven by common interests between Israel and the UAE in counterbalancing Iran.

For years, the U.S. has sought to integrate India more fully into its system of geopolitical alliances around the world. Under President Joe Biden, Washington has expressed a greater keenness to build coherent alliances in order to take on adversaries around the world – whether China, Russia or Iran.

As New Delhi enters that network in new places, it faces a trade-off. Finding common ground with allies on geopolitics will help India garner support from these countries for its own interests. But that also means that it might be forced to get off the fence on crucial and sensitive geopolitical debates.