Similar to his father and grandfather, North Korean leader Kim Jong Un uses a combination of fear tactics and gift giving to help secure his influence over members of the North Korean elite. 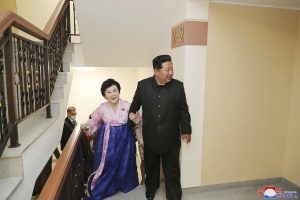 As decades of heavy U.S. and U.N. economic sanctions and financial restrictions continue to isolate North Korea from the global economy, the Kim family employs a mix of fear tactics and gift giving to secure loyalty from the country’s elites. In 2013, Kim Jong Un shocked the world by ordering the execution of his uncle, Jang Song Thaek, as well as several other top North Korean political leaders, for their alleged role in attempting to undermine his rule. He continued this trend of familicide in 2017 when he ordered the assassination of his own half-brother in a Malaysian airport via a VX nerve agent so powerful that it is banned under the 1993 chemical weapons convention. However, in certain other instances, Kim has sought to appeal to the materialistic side of the elite class as opposed to toying with their mortality.

Despite the famous North Korean song “Socialism Is the Only Way” performed by singers allegedly handpicked by Kim himself, the Kim family has a long history of rewarding North Korean elites with luxury apartments, designer bags, vehicles, and watches. Most recently, in mid-April Kim unveiled a new “luxurious residential district” for top loyalists in downtown Pyongyang. According to North Korean state media, Jo Yong Won, the new secretary of the Central Committee of the ruling Workers’ Party, stated that “Before anybody else, those who diligently support the Party and the state should enjoy the best life.” His impassioned speech confirmed claims that blind loyalty to the Kim regime amongst the elites is often rewarded with luxury goods and better living conditions.

One of the most notable recipients of this loyalty-for-luxury exchange is the country’s most famous state news anchor, Ri Chun Hee. In in a recent video, Kim is seen ushering Ri through her newly gifted home as she clutches onto his arm smiling and thanking him. Allegedly once referred to as a “national treasure” by Kim, Ri has represented the face of North Korean media and its inflammatory commentary for over 40 years, ranging from reporting the death of the country’s founder Kim Il Sung in 1994 to North Korea’s first nuclear weapon test in 2006. Her frequent appearances in public alongside Kim and their visible closeness in videos released by North Korean state media suggest that the purchase and distribution of luxury goods, including properties, is a preferred method used by the Kim family to reward its loyalists when economic sanctions restrict other perks, such as international travel and foreign investments.

Despite a series of U.S., EU, and U.N. economic actions ranging from sanctions to export controls barring the sale and distribution of luxury goods to North Korea, the Kim family has successfully evaded these measures through exploiting supply chain loopholes and corrupt trading networks. For example, Bureau or Office 39 is an elusive department of the North Korean government tasked with securing a foreign currency slush fund for the country’s leaders, including procuring funds and trade networks to obtain luxury goods for the Kim family and their loyalists. Office 39 allegedly participants in numerous illicit financial activities such as counterfeiting foreign currency, narcotics trafficking, international insurance funds, and other illegal dealings. Kim Yo Jong, the sister of Kim Jong Un, has been accused of working closely with Office 39 to ensure that Kim loyalists are rewarded for their obedience to the regime.

Additionally, a 2019 C4ADS report exposed methods in which North Korea illegally obtained over 800 luxury vehicles, including two armored Mercedes-Maybach S600 Guard vehicles valued at more than $500,000 each. In the same year, NK News released public images of a North Korean department store in Pyongyang that featured luxury goods from top designer companies such as Chanel, Rolex, Mont Blanc, SK-II, and Canon. As the international enforcement of bans on luxury goods is not immune to global government corruption and illicit trading networks, the Kim family will likely continue to use a mix of fear tactics and gift giving to secure loyalty from the elite class.

China’s Swipe At US On Indo-Pacific Strategy

Possibility Of New Variants Of Omicron In Delhi, Know In Details

The Morning After: Will EA be the next gaming giant to sell itself?