As monkeypox cases spread across the world — the US, UK, Spain, Israel have all reported infections — the Centre has asked states to be more vigilant and keep an eye on people having a history of travel to the affected countries. Some cities have also set up isolation centres 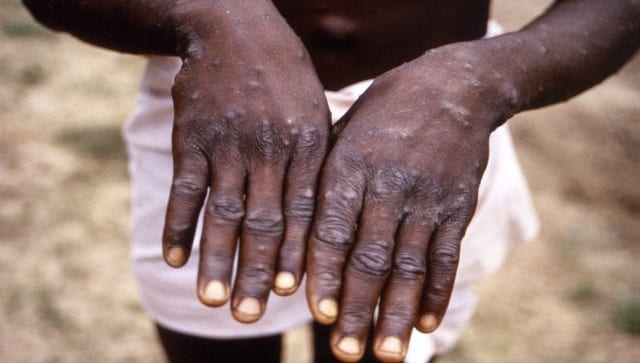 Monkeypox is a viral zoonosis (a virus transmitted to humans from animals) with symptoms very similar to those seen in the past in smallpox patients, although it is clinically less severe. AP

We aren’t done with coronavirus, but the world is already facing a new threat — an outbreak of monkeypox.

As of Saturday, 92 confirmed cases and 28 suspected cases of monkeypox have been reported from 12 countries, the World Health Organization (WHO) said.

The United Nations health agency also added that it would provide further guidance and recommendations in coming days for countries on how to mitigate the spread of monkeypox.

WHO official David Heymann, an infectious disease specialist, was quoted as telling Reuters, “What seems to be happening now is that it has got into the population as a sexual form, as a genital form, and is being spread as are sexually transmitted infections, which has amplified its transmission around the world.”

The virus, which otherwise infects simians, was reported in 1970 in the Democratic Republic of the Congo.

In the past 50 years, there have been very few cases of monkeypox outside central and west Africa. That’s why the sudden spread of the disease in Europe in unusually high numbers has raised an alarm.

As of date, there are no cases of monkeypox in India.

The Union government has issued instructions to states and Union territories to keep an eye on people who show symptoms associated with monkeypox and have a history of travelling to the affected countries.

The Centre has also state that suspected samples would be sent to the National Institute of Virology, Pune (NIV) for diagnosis.

The National Centre for Disease Control (NCDC) has instructed states and Union territories to move suspected cases to an isolation centres and keep them until all lesions have resolved and a fresh layer of skin has formed or until the treating physician decides to end isolation.

Also, if cases continue to increase, the government could start random screening of people arriving from affected countries, reports Times of India.

Health experts believe as new cases are being detected in various countries, the possibility of the disease occurring in India cannot be ruled out. However, they have advised people not to panic.

“Everything should be taken seriously. And we should keep a guard but at the same time, there is no need to get panic. We need to study how it is evolving, and how many people are getting affected. Fortunately, it is not that severe as smallpox,” Dr Ishwar Gilada, infectious diseases expert and consultant for HIV/STDs, said to ANI.

“There is no need to panic. The infection potential of monkeypox is markedly less besides being a self-limiting infection,” Dr Kabir Sardana, professor of dermatology, Ram Manohar Lohia Hospital, told Times of India.

Mumbai’s civic body, the Brihanmumbai Municipal Corporation (BMC), has already stepped up its vigilance against the virus. A News18 report stated that it has kept a 28-bed ward ready at the Kasturba Hospital for the isolation of suspected patients.

The BMC also said that airport authorities are screening the passengers coming from endemic and non-endemic countries showing outbreaks.

How other countries are coping?

The outbreak has taken scientists across the world by surprise.

Viewing the situation, Belgium, on Monday, became the first country to make a 21-day quarantine compulsory for monkeypox patients after four cases of the disease were reported last week.

Meanwhile, the UK has begun to inoculate healthcare workers who may be at risk while caring for patients with the smallpox vaccine, which can also protect against monkeypox.

The US government says it has enough smallpox vaccine stored in its Strategic National Stockpile (SNS) to vaccinate the entire US population.

Over a quarter of MSMEs lost over 3% market share due to Covid: Crisil

Explained: What’s the impact of a Russian debt default?

The Morning After: Will EA be the next gaming giant to sell itself?

Over a quarter of MSMEs lost over 3% market share due to Covid: Crisil

Q&A with crypto billionaire Mike Novogratz on crypto as a scam, differences with past crashes, an incoming recession, LUNA's collapse, blaming the Fed, and more (Jen Wieczner/New York Magazine)