There are showrunners who make the stars. Then there are those who bring out the actors in them — the mentors and teachers who are seldom acknowledged for laying the foundation of their students, who later go on to rule the big screen. One such Bollywood gem has been iconic actor himself, Asrani, who holds credit of teaching and honing the acting skills of names like Jaya Bachchan, Shabana Azmi and Shatrughan Sinha.

Asrani graduated from the first batch of the Film and Television Institute of India (FTII) in Pune in 1966. “But it wasn’t my passport to Bollywood. At that time, no one understood that it is possible to learn acting in an institute,” he reminisced in a interview with The Hindu in 2017. 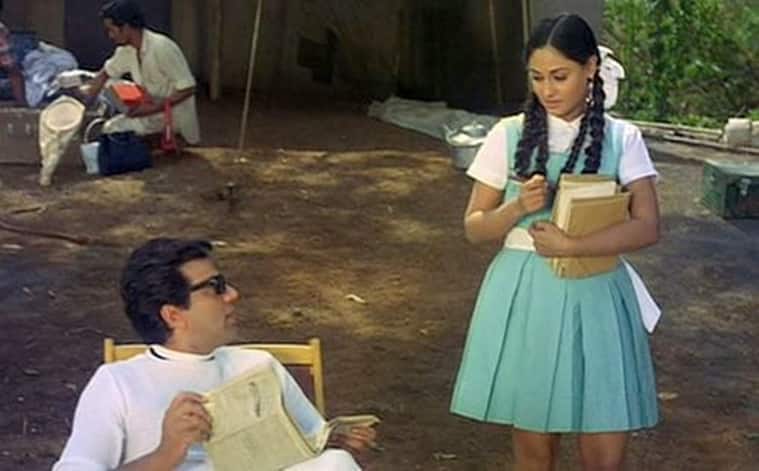 Jaya Bachchan with Dharmendra in a still from Guddi. (Photo: Express Archives)

Lack of opportunities and few blink-and-miss roles here and there forced Asrani to start teaching at FTII while struggling in Mumbai. Interestingly, it was one of his fourth year students, who opened up opportunities for him.

Legendary filmmaker Hrishikesh Mukherjee, who was a guest faculty for editing at FTII, once reached out to Asrani on Gulzar’s recommendation. Gulzar was looking to cast Jaya Bachchan (then, Bhaduri) for his film Guddi (1971). Asrani took Hrishikesh Mukherjee to Jaya who had done noteworthy work in a student film. Along with Jaya, Asrani also auditioned for the movie. He ended up playing an aspiring actor in Guddi who elopes from his home to fulfil his dreams in the Maximum City.

“When Hrishida asked me where Jaya was, I immedi­ately directed him to the canteen where she was having tea. Anil Dhawan and Danny (Denzongpa) were also present. Jaya dropped her cup of tea when I told her that Hrishida had come to meet her! While he spoke to Jaya, I pestered Gulzar for a role. He quietly told me that there was one, but not to let Hrishida know that he had told me about it,” Asrani told Cinestaan in an interview dated 2016. Guddi became a sleeper hit and both the teacher Asrani and his student Jaya Bhaduri shot to limelight. “Consequently, I signed eight films and there was no looking back,” he added. Asrani’s performance left such an impact on Hrishikesh Mukherjee and Gulzar that they eventually cast him in all their films later.

“Even today when Jaya meets me, she calls me ‘Sir’ as I was once her teacher,” Filmfare quoted Asrani in 2018. “I was one of the four ‘brothers of the bride’ at Jaya and Amitabh Bachchan’s wedding along with Gulzar saab, Ramesh Behl and a cousin. Sanjay Gandhi was also present at the private gathering,’ the veteran actor added.

Asrani went on to give remarkable performances in Bawarchi (1972), Namak Haraam (1973), Chupke Chupke (1975), and Abhimaan. His most memorable character till date remains the jailor from blockbuster Sholay (1975), though a lot of prep went into performing that part.

Asrani was given a book by writers Salim-Javed on World War II with Adolf Hitler’s unseen pictures. “They asked me to study the photographs carefully and a costume was stitched resembling Hitler. I listened to his speeches, his voice modulation and practised his walk. The dialogue, ‘Hum angrezon ke zamane ke jailor hain’ was to emulate the same inflection,” Asrani told The Hindu. “The ‘Ha Ha’ at the end of the sentence was inspired from Jack Lemmon’s performance in The Great Race (1965),” he added.