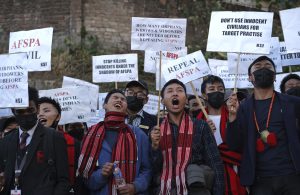 Nagas shout slogans during a rally protesting the killings of 14 civilians by Indian army soldiers in early December, in Kohima, capital of the northeastern Indian state of Nagaland, Friday, December 17, 2021.

From the inclusion of India’s Northeast region in the government’s Act East Policy (AEP) in 2014, it is evident that development and stability of the Northeast plays an important role in India’s AEP. Ongoing projects like the India-Myanmar-Thailand Trilateral Highway, which connects India’s Manipur with Thailand via Myanmar, and the Kaladan Multi Modal Transit Transport project, which connects Kolkata to Mizoram via Myanmar seek to make the Northeast a gateway for Southeast Asia. However, the success of such undertakings largely depends on the stability of the region, including India’s Northeast.

The December 4 “mistaken” killings of 14 civilians by the Indian army in Mon district of Nagaland is a reminder that military power backed by draconian law such as Armed Force Special Power Act (AFSPA) 1958 can never bring stability and peace to the region. Rather, the recent killings – and, more broadly, the AFSPA – only reinforced both insecurity and distrust toward India’s armed forces. Immediately after the incident, the chief ministers of the Northeast states of Nagaland, Manipur, and Meghalaya took up the longstanding demand of human rights activists such as Irom Chanu Sharmila to repeal AFSPA. In fact, the Nagaland state assembly, condemning the Mon incident, unanimously passed a resolution to repeal AFSPA from the Northeast. Repealing AFSPA is the most important step towards building popular trust toward the government of India and stability in the region, which is necessary to boost and support India’s AEP projects.

Apart from geographical proximity to the regions targeted by India’s Act East Policy, most of the Northeast is culturally, ethnically, socially, and linguistically closer to Southeast Asian countries like Myanmar, Thailand, Vietnam, and even southern China than is the rest of mainland India. For instance, the Naga ethnic group extends from Nagaland to the Sagaing and Kachin regions of Myanmar. Similarly the Meitei ethnic group of Manipur is spread across the Mandalay and Sagaing regions of Myanmar. Linguistically, the Tai language, which is spoken in mainland Southeast Asian countries like Myanmar, Thailand, Laos, Vietnam, and southwestern China, is spoken by the indigenous Tai people residing in parts of Assam, Arunachal Pradesh, and Meghalaya. While this multifaceted proximity is certainly the basis on which the AEP is grounded, much of the development on the ground so far has been largely strategic, where the people of the Northeast have been sidelined in the name of national interest. The  “democratic deficit” of the Northeast, the deadlock of the Naga Peace Accord, and the prevalence of AFSPA in parts of the region speak volumes in this regard.

Incidents like the Mon district killings of civilians have always made the insurgent groups and their movement stronger and more legitimate; locals stand by them to seek security despite their alleged extortions from people. In response to the Mon district incident, the NSCN (IM) leader M. Daniel Lotha has called for “Naga unity” and invoked the spirit of Naga “oneness and nationalism.” Other incidents of deliberate killings of civilians by armed forces, under the provisions of AFSPA, remain fresh in the memory of the people of the Northeast. On June 4, 2021, just six months before the Mon incident, a daily wage worker in Manipur was shot dead by an officer of the Assam Rifles in an alleged fake encounter case. This insecurity or the failure of armed forces to provide security to the local people has led to the feeling of “othering” amongst the people of the Northeast, which only works in favor of the insurgent groups.

Just when popular support toward the insurgent groups was thought to be waning and peace in the region was finally coming back, the killings of innocent civilians, whether due to intelligence failure or not, is enough to make people lose faith in India’s armed forces and government. As the operation in Mon district was carried out by the Indian Army’s Special Forces without any coordination or communication with local police or government authority, which should be the practice according to AFSPA, the intent of those commanding such operations is questionable. When locals know that armed forces operate without any accountability under AFPSA, innocent civilian killings compel them to align themselves with insurgent groups. In this way, AFPSA ironically empowers the insurgent groups.

AFSPA and the Instability of the Northeast

Reduced insurgency related fatalities or numbers of attacks do not imply lasting peace and stability. While the imposition of AFSPA in the Northeast for the last six decades might have reduced the insurgency-related incidents and fatalities, it has caused perennial insecurity whenever any innocent unarmed civilian is killed by armed forces. Insecurity among the people in the interiors of the region like Nagaland and Manipur and the growing support and strength of insurgent groups and their safe-havens in neighboring countries like Myanmar should be a cause of concern for the region’s stability. A number of dormant insurgent groups within and across the Northeast can easily be revived if Mon-like incidents occur frequently in the region, and the armed forces continued to be protected by AFSPA.

The use of force, by means of AFSPA, to provide security and stability in the Northeast is therefore counterproductive. It can never solve and address the problem of insurgency in the region.  In fact, the prevalence of AFSPA has made the region highly fragile. Current efforts only aim to manage and suppress the insurgency-related incidents rather than addressing the problem at the root and winning the trust of the people.

AFSPA must be repealed immediately in response to the killings of civilians by the Indian Army in Mon district of Nagaland. Not only will such a move win the trust of the people toward the armed forces, but it will also pave the way for a more conducive and stable environment in the region for various ongoing AEP projects.

Removing AFPSA does not mean compromising on national security; rather it means freeing the people from perpetual terror and insecurity. For border regions like the Northeast, with complex and multifaceted proximity with neighboring countries, national security cannot be achieved only by the military; it has to be also supported by the local people. Confidence building measures, such as repealing AFPSA from the region, should be given priority. Although the role of the military and armed forces remains relevant in the sensitive border areas of the Northeast, fueled by a politically unstable Myanmar and revisionist China, for people of the Northeast the focus should be more on soft power approaches like generating employment opportunities by leveraging the interest and inclination of local youths. For instance, South Korea, one of the key partners of  India’s AEP, can invest to make the region – including  Manipur, where Hallyu or the Korean cultural wave is more popular than Bollywood – a hub of Korean language and culture education in South Asia.

In short, repealing AFPSA from the Northeast is not an option but a necessary condition for stability and peace in the region, which is crucial for India’s ambitious AEP. It means normalizing the people the Northeast as an integral part of India and also it means normalizing the armed forces as a security provider for the people in the region from external threats. In order to build trust between local people and armed forces, and by extension to boost AEP, AFSPA must be discarded from the Northeast. As argued in the book “Mainstreaming the Northeast in India’s Look East Policy and Act East Policy,” edited by Atul Sarma and Saaswati Choudhury, it is perhaps time for India to consider the Northeast as a “center” rather than a “gateway” to Southeast Asia under AEP.

Hong Kong expands its vaccine requirements as it fights to control Omicron.

BJP needs to change its mindset about women': Congress