SRINAGAR, INDIA – The tension between India and China is mounting again in the Himalayan region of Ladakh over a new bridge constructed by the Chinese on the banks of the Pangong Tso Lake in eastern Ladakh. Analysts say there is a possibility of continued skirmishes between the two nuclear states.

An open-source intelligence analyst, Damien Symon, with the Twitter handle @detresfa_, recently shared satellite imagery of the area that showed a bridge-like structure connecting the two banks of the Pangong Tso Lake.

The head of the department of Peace and Conflict Research at Sweden’s Uppsala University, Professor Ashok Swain, told VOA this is a clear sign China has no plans to withdraw from the areas of India from which it took control in 2020.

Swain emphasizes that India lacks the military muscle to push China to agree to de-escalation. He says China’s President Xi Jingping gains the upper hand in the escalating the border conflict, while Indian Prime Minister Narendra Modi’s political calculation forces him to downplay the Chinese aggression, and within this context, disengagement is the best India can hope to achieve.

This standoff in the frigid Himalayan region also comes amid the allegation Beijing is erecting settlements on the Indian side. India criticized China for building a bridge in eastern Ladakh, which India’s Ministry of External Affairs, or MEA, asserted was being erected in territories “that have been under unlawful occupancy for around 60 years now by the Chinese.” 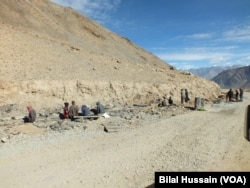 While confirming the development, Arindam Bagchi, an official spokesperson with the MEA said, ‘The administration has been keeping a close eye on allegations that China is building a bridge over Pangong Lake. The land on which this bridge is being built has been illegally occupied by China for the better part of 60 years.’

Reacting sharply to India’s allegation, China’s Foreign Ministry spokesperson, Wang Wenbin, in a media briefing, said, ‘I want to stress that China’s infrastructure construction on its territory entirely falls within its sovereignty and is aimed at safeguarding China’s territorial sovereignty and security, as well as peace and stability in the China-India border.’

India ‘Monitoring’ Bridge Being Built by China Along Border

The fundamental reason for the tension between the two countries, according to senior fellow and co-director China, East Asia at the Stimson Center, Yun Sun, is the dispute about the territory and both want to advance their positions and strengthen their claims. Sun told VOA the Chinese also can present their own complaints about the buildups by India in the disputed region. The result is a classic infrastructure race, akin to an arms race.

Experts say the purpose of this new bridge is to ensure quicker military action if needed by reducing the distance to the other side by about 125 kilometers. Earlier in 2020, China faced a setback when the Indian army took control of the Kailash Range on the southern bank of Pangong Tso Lake. 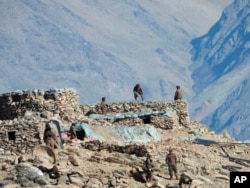 FILE – This photograph provided by the Indian Army, shows Chinese troops dismantling their bunkers in the Pangong Tso region, in Ladakh along the India-China border, Feb.15, 2021.

Michael Kugelman, deputy director of the Asia program and senior associate for South Asia at the Wilson Center, told VOA the new transport infrastructure for Chinese troops is significant because it strengthens China’s posture along the border in the event of another showdown with India.

“Since the border isn’t clearly defined and is disputed in different places, any new act, even if seen in isolation as perfectly harmless, can be perceived by the other side as a problem, if not a provocation. With India-China relations still tense even nearly two years after the Ladakh crisis, it won’t take much to cause a new crisis.

“This is why dialogue will be essential, and especially military-to-military, to preempt the possibility of a new crisis,” Kugelman added.

Pravin Sawhney, a former Indian army officer and author of many books, told VOA the Chinese People’s Liberation Army is creating a permanent habitat, training positions and an operational base on the borders of Ladakh. “At present, about 75 percent of the lake is with China, and according to the intent behind China’s new bridge, seems to take over the whole lake,” Sawhney claims. 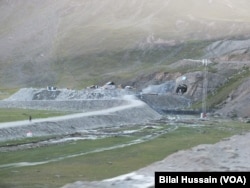 Construction site of the Zoji La tunnel near Baltal, Kashmir

Another reason for renewed tension between India and China is the new maps being drawn by India, where Ladakh is shown as being Union Territory and certain parts claimed by China are shown as being Indian areas. “It has not gone well with China,” said Sawhney.

Additionally, analysts say a gray-zone operation like this one by the Chinese side could reach a threshold limit any time and be a prelude to a war in the near future. According to Sawhney’s assessment, the PLA will be ready for conflict by 2023, and then actually going to war will be only a matter of time. ‘PLA is doing it all under grey-zone operation,’ Sawhney said. ‘War between India and China can’t be ruled out.’

Aparna Pande, research fellow and director at the Hudson Institute’s Initiative on the Future of India and South Asia, underscored that there will always be tension along a border between two nuclear-armed countries that have more than 200,000 troops facing each other. She says there is a possibility of continued skirmishes but not necessarily a war. 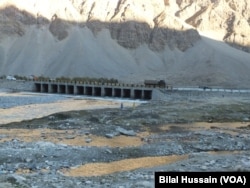 Army vehicles are seen on the way to Leh in the Himalayan region of Ladakh, India.

Contrary to what Pande believes, Craig Singleton, an adjunct fellow at the Foundation for the Defense of Democracies – a nonpartisan research group focused on foreign policy and national security issues – told VOA that China’s leaders are clearly unnerved by New Delhi’s deepening ties with Washington, not to mention Tokyo and Canberra.

By maintaining an active presence on India’s border and by seeking leverage over New Delhi, China may be attempting to coerce India’s leadership to make political concessions.

Singleton assesses that China is attempting to establish leverage over India by denying its territorial integrity without engaging in wanton expansionism. What remains unclear, however, is how far Beijing is willing to go in antagonizing New Delhi at the same time its leaders face serious domestic economic challenges and increasingly find themselves isolated on the world stage.

The move has come at a time when the residents of Chushul already are deeply concerned. These new developments further add to their worries. Last October, the commander-level military discussions came to a standstill when the Indian Army said the Chinese side had not accepted their “positive proposals” following the 13th session.

India and China have agreed to resume the 14th round of military discussions expected to be held on January 12. More than 50,000 troops currently guard the sensitive region of the LAC from both sides.

China warns of ‘serious consequences’ after tracking US warship | China

Poem: At Last There Is Yesterday

Vaccination records needed to enter these 12 places in Taiwan!

Fauci Says Senator Rand Paul Is Fueling Threats Against Him

Study finds COVID-19 pandemic may have increased cases of high blood pressure; find out how and what experts have to say, Health News, ET HealthWorld