The goods and service tax (GST) numbers for December cap an extraordinary quarter in terms of receipts from the nationwide tax for the Centre and states. At an average monthly gross collection of Rs 1.3 trillion, the October-December quarter of 2021-22 (FY22) was the best for the Centre and states since GST was introduced (July 1, 2017), showing just how strong economic recovery has been.


Barring May and June, which were impacted by lower economic activity due to the second wave of the Covid-19 pandemic, the first nine months of FY22 have seen encouraging GST receipts at above Rs 1 trillion.

However, the Omicron variant of the coronavirus continues to be a big unknown, in terms of the economic impact. Depending upon how fast the third wave spreads and how severe the restrictions upon businesses are, GST collections in February and March 2022 could be affected, observe analysts.


“What happens in the months to come depends upon the severity of the third wave. The restrictions we are seeing so far are in certain states and for certain activities. So far, no state has imposed mass restrictions the way we saw in the second wave,” said M S Mani, partner, Deloitte India. 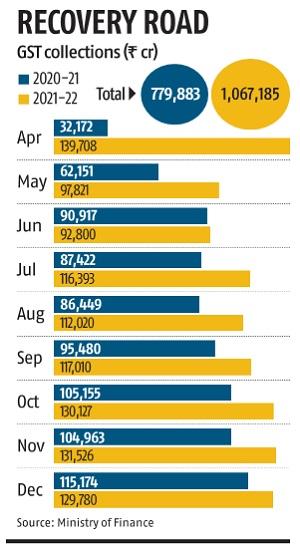 Mani said there is no clarity on how severe the Omicron wave would be and what further restrictions it could entail. “Whether there will be restrictions in interstate movement of goods is what needs to be keenly watched,” he added.


Gross GST collections for May 2021 (which would reflect April activity) came in at Rs 97,821 crore, while those for June (a barometer for May’s economic activity) were the year’s lowest at Rs 92,800 crore. Hit by a deadly second wave, these were the only two months in FY22 which registered collections of Rs 1 trillion.


“I don’t see a complete lockdown like we saw at the peak of the second wave. But economic activity will definitely get impacted. Yes, the collections could be lower than what we have seen in the past two-three months. However, it may not be as bad as what we saw in May-June,” said Rajat Bose, partner, Shardul Amarchand Mangaldas & Co.


On Sunday, West Bengal became the latest state to impose restrictive measures on business establishments, with shopping malls, market complexes, restaurants and bars, government and private offices, and local trains instructed to operate at 50 per cent capacity from Monday. Gyms, salons, tourist spots will be completely shut until further notice.


These restrictions follow similar diktats already in place in Delhi, parts of Haryana, Uttar Pradesh, Maharashtra, and other states.


However, leaving aside the uncertainty about the third wave, analysts expect economic recovery to continue at the pace it has been over the past few months.


“The economic performance, as demonstrated in the GST collections, has recovered faster than it was expected to. When we were hit by the second wave, we did not expect recovery to happen so quickly. The Rs 1.3 trillion per month seems to be the new normal,” said Mani.


Independent economists and policymakers within the government consider GST as a good yardstick of how the economy is working, given that it captures consumption and demand in goods, services, trade, and interstate movement across sectors.


“Whenever the economy is on a rebound, there is pent-up demand and spending tends to be much more. That is what happened, especially in the festival season,” said Bose.


In a media release on Saturday, the finance ministry said the average monthly gross GST collection for October-December quarter was Rs 1.3 trillion, compared with Rs 1.1 trillion in April-June and Rs 1.15 trillion in July-September.


“Coupled with economic recovery, anti-evasion activities, especially action against fake billers, have been contributing to the enhanced GST. The improvement in revenue has also been due to various rate rationalisation measures undertaken by the GST Council to correct an inverted duty structure. It is expected that the positive trend in revenue will continue into the last quarter as well,” said the ministry.

Walmart invites Indian sellers to expand overseas via its US marketplace