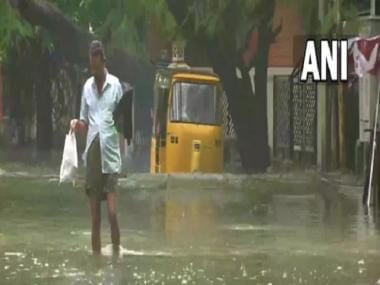 The depression over southwest and adjoining west-central Bay of Bengal moved northwestwards, about 80 km east-southeast of Chennai and 140 km east-northeast of Puducherry on Thursday

The depression over southwest and adjoining west-central Bay of Bengal moved northwestwards, about 80 km east-southeast of Chennai and 140 km east-northeast of Puducherry on Thursday. Heavy rains in Tamil Nadu and Andhra Pradesh is likely to decrease from Friday as the depression enters into land and weakens subsequently, said the India Meteorological Department (IMD). It has also issued a red alert, indicating heavy to extremely heavy rainfall, in parts of Tamil Nadu, including northern Chennai, Tiruvallur, Chengelpet, Kancheepuram, Ranipet, Villupuram and Cuddalore districts.

The IMD also said a fresh low pressure area is likely to form over south Andaman Sea around 13 November.

Meanwhile, Governor R N Ravi on Thursday thanked Prime Minister Narendra Modi and Home Minister Amit Shah for the Centre’s support to Tamil Nadu in relief and rescue operations. The governor, who is now in Delhi, spoke to Chief Minister M K Stalin over phone about the rescue and relief measures undertaken in Tamil Nadu. He discussed with Stalin over phone, “about the rescue and relief operations undertaken by the state government in view of the heavy rains caused by the depression in Bay of Bengal,” Raj Bhavan, Tamil Nadu tweeted.

Ravi also spoke to director general NDRF SN Pradhan, about the rescue and relief operations. NDRF has deployed 14 battalions and has more forces on standby, the Raj Bhavan said in another tweet.

Most districts in northern Tamil Nadu including Chennai are likely to receive heavy to very heavy rainfall, deputy director general of meteorology, S Balachandran said, even as the city and its suburbs received sharp showers all through the night and on Thursday morning as well.

“It is very likely to continue to move west-northwestwards and cross north Tamil Nadu and adjoining south Andhra Pradesh coasts around Chennai by the evening of today,” it added. As a result, Balachandran said, Chennai would witness “strong surface winds” ranging between 40-45 km. “People should not venture out unnecessarily,” he told reporters.

Citing latest rainfall data, he said Tambaram (Chengalpet dt) received 232.9 mm, followed by Cholavaram (220 mm) and Ennore at 205 mm. Chennai (Nungambakkam) recorded 158 mm. The system was being constantly monitored, he said in response to a question.

Rains continued to lash various parts of the city and its suburbs on Thursday, leading to inundation in many areas like KK Nagar even as a number of subways and roads in many parts of the metro were closed for vehicular traffic.

Police said trees were uprooted in places like Egmore and Perambur.

Personnel of Greater Chennai Corporation, police, NDRF and Fire and Rescue Services were involved in various relief and rescue work, including pumping out stagnant water.

The north-east monsoon, which brings the bulk of rainfall to Tamil Nadu, has been active for the past fortnight and many parts have been receiving incessant rainfall since Sunday. Most of the water bodies in the state, including the reservoirs meeting the drinking water needs of Chennai, the Mettur Dam in Salem and others are full and excess water is being released from most of them.

#WATCH Chennai’s popular Marina beach flooded due to heavy downpour as a result of cyclonic circulation in the Bay of Bengal#TamilNadupic.twitter.com/L6N4iIhj1u

Meanwhile, Stalin spoke to ministers and special officers deputed to manage the rain-related issues in various districts and reviewed the situation with them, an official release said. He directed them to expedite the relief activities and ensure provision of quality food and medical facilities in relief camps.

He further wanted the authorities concerned to take steps to prevent crop loss. He also held a review meeting with top state government officials including Chief Secretary V Irai Anbu. The chief minister also ordered constituting a six-member ministerial panel, headed by Cooperatives Minister I Periyasamy, to assess crop damage, especially in the Cauvery delta region, and submit a report to the government to expedite relief work, the release added.

So far, at least 14 people and 157 cattle have died. Besides, 1,146 huts and 237 houses have been damaged in Tamil Nadu due to the incessant rains. Power supply has been disconnected from more than 65,000 houses in Chennai.

Till now, 14 people have lost their lives in the state due to heavy rains: Kumar Jayanth, Principal Secretary, Revenue Department, Tamil Nadu pic.twitter.com/O44dvgTLdg

Several roads in Chennai are inundated and the traffic police has closed at least seven roads and 11 subways, and created diversions across the city for commuters. Due to waterlogging on rail tracks, some suburban trains were suspended while others were delayed.

#Update | Due to severe rains and heavy cross winds, arrivals at #AAI Chennai Airport will remain suspended from 1315 hrs to 1800 hrs, today. Departures will continue. The decision has been taken considering the safety aspect of passengers and severity of wind. @AAI_Official

In another tweet, the metropolis airport regretted the inconvenience caused to passengers due to severe weather conditions.

The ESI Hospital located in Chennai’s KK Nagar was also waterlogged on Thursday due to heavy rains. “The hospital wards including COVID19 wards are not affected,” said Dr Mahesh of ESI hospital.

Since 6 November, Chennai and its neighboring districts Kanchipuram, Chengalpattu, Karaikal, Tiruvallur have been witnessing heavy downpours.  The city witnessed the highest rainfall in a single day since 2015 due to the northeast monsoon, which has been impacted by continued La Nina, a complex weather pattern caused by variations in ocean temperatures in the equatorial band of the Pacific Ocean.

For 24-hours from 8.30 am on 6 November, Chennai received 210 mm of rainfall, according to the Regional Meteorological Centre (RMC). “This is also the highest amount of rainfall recorded in a single day in Chennai since 2015 (when it rained 494 mm on 1 December),” said deputy director of RMC, N Puviarasan.

On 6 November, 2015, Chennai received 246.5 mm of rainfall on a single day–which was the highest in the last ten years registered solely for November then. Following that, in 2017 and 2020 November, the city recorded 182.7mm and 161.8mm of rainfall in November. “These rains would be classified as an extreme weather event in Chennai as rainfall has crossed 20cm,” said Puviarasan. The record rainfall for the month is 452 mm, in 1976 on 26 November.

From December, a weekly market in Mumbai exclusively for organic produce