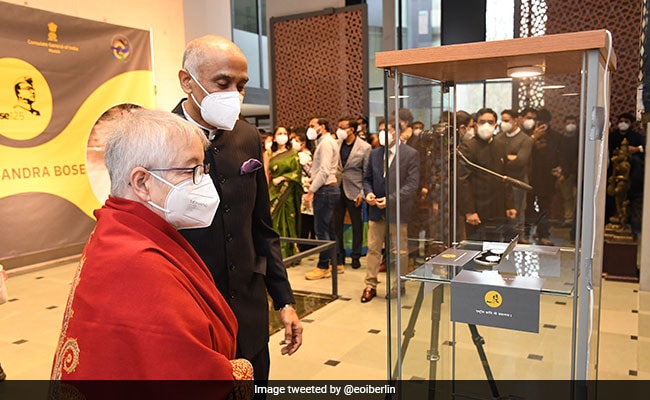 Netaji birth anniversary: India has been celebrating January 23 as Parakram Diwas since 2021.

The exhibition titled “Bose 125”, which includes rare, personal letters and memorabilia from Netaji, was inaugurated at the Embassy by Ambassador of India to Germany Harish Parvathaneni and Prof. Dr Anita Bose Pfaff, Netaji’s daughter.

The Indian government has been celebrating January 23 as Parakram Diwas since 2021.

On the occasion of the 125th Birth Anniversary of Netaji, the government has included Parakram Diwas in the Republic Day celebrations. Prime Minister Narendra Modi inaugurated a hologram statue of Netaji at the India Gate to mark the occasion.

External Affairs Minister Dr S. Jaishankar paid homage to Netaji on the occasion of Parakram Diwas through a tweet. He referred to Netaji’s indomitable spirit and devotion to the motherland as a source of constant inspiration to all Indians, including the youth.

Dr Bose Pfaff, an Overseas Citizen of India, expressed deep appreciation for the government’s decision to commence Republic Day celebrations with Netaji’s birth anniversary and conveyed her greetings to people of India on this joyous occasion.

The ambassador of India, in his remarks, stated that the country would be eternally indebted to Netaji for his role in the freedom struggle and the Independence of India.

As we celebrate “Amrit Mahotsav” in Germany, the Ambassador announced the commitment of the Indian government to build a strong, confident, and Aatmanirbhar Bharat as envisioned by Netaji Subhas Chandra Bose.

Monkeypox outbreak: WHO to hold emergency meeting as cases spread in US, parts of Europe | World News