“We were excited to collaborate and clear about the risks. We also believed that Elon as a fiduciary of the company where he, like all board members, has to act in the best interest of the company and all our shareholders, was the best path forward. The board offered him a seat,” Agrawal said.

In a brief email to the company, the Twitter CEO stated that as the company’s largest shareholder, Elon’s views would be taken into account.

He said, “We announced on Tuesday that Elon would be appointed to the board contingent on a background check and formal acceptance. Elon’s appointment to the Board was to become officially effective from April 9, but Elon shared that same morning that he will no longer be joining the board. I believe this is for the best.” 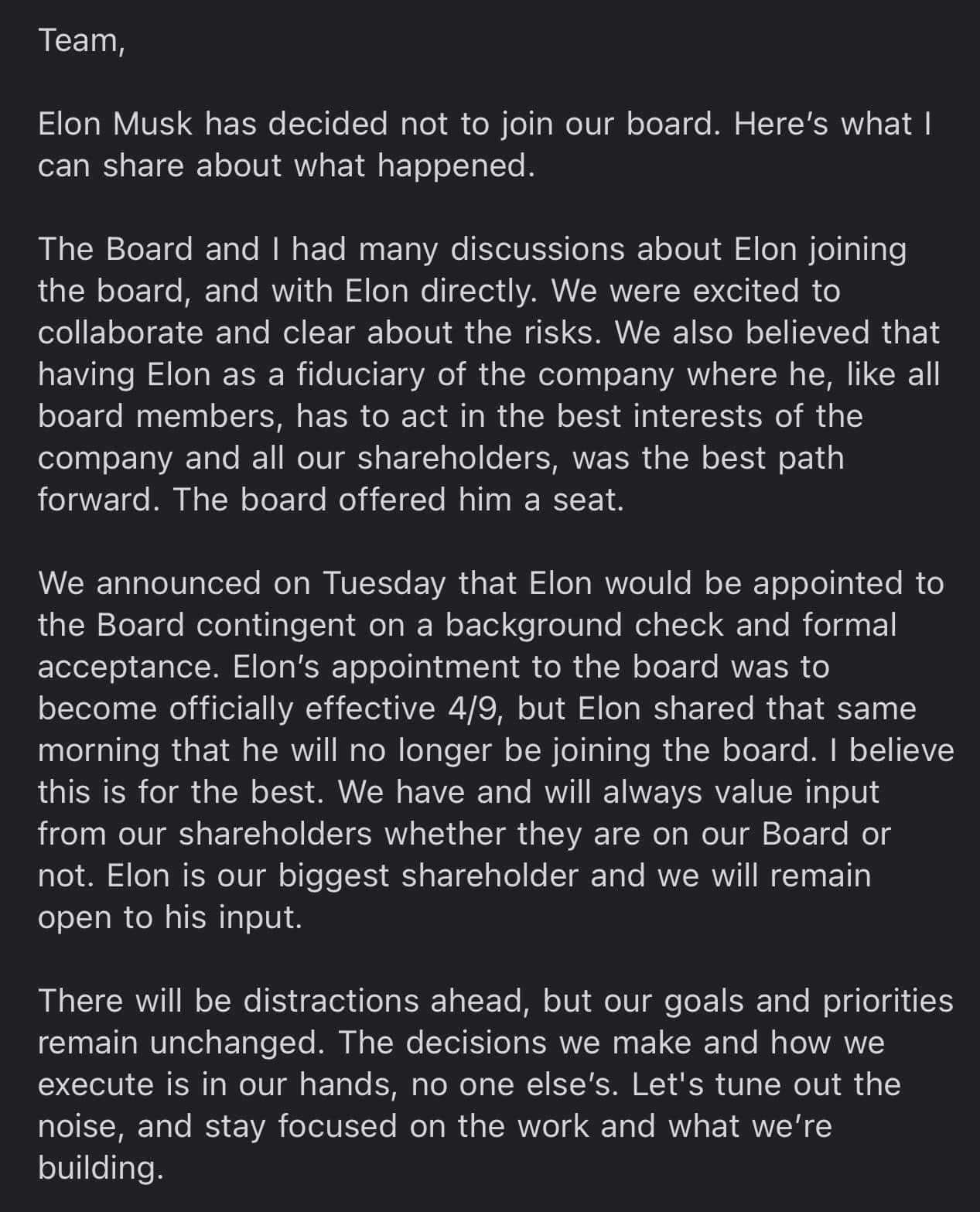 “There will be distractions ahead, but our goals and priorities remain unchanged. The decisions we make and how we execute is in our hands, no one else’s. Let’s tune out the noise, and stay focused on the work and what we’re building,” Agrawal added in his post.

Joining the board of Twitter would have prevented Musk from owning more than 14.9 per cent of the company.

Also, the way Musk tweets freely on controversial subjects could put Twitter in a catch-22 situation in the near future as to whether to act on his tweets or not.

Since the announcement, Musk has shared several polls on Twitter to make significant changes in the platform, including an edit button which is now under development.

“I`m excited to share that we`re appointing @elonmusk to our board! Through conversations with Elon in recent weeks, it became clear to us that he would bring great value to our Board,” Agrawal posted last week.

Musk replied to Agrawal: “Looking forward to working with Parag & Twitter board to make significant improvements to Twitter in coming months!”

According to a fresh filing with the US Securities and Exchange Commission (SEC), Musk will serve as a class II director until 2024.

This is a type of position that can be used as an anti-takeover measure.

“For so long as Musk is serving on the Board and for 90 days thereafter, Musk will not, either alone or as a member of a group, become the beneficial owner of more than 14.9% of the Company`s common stock outstanding at such time, including for these purposes economic exposure through derivative securities, swaps, or hedging transactions,” according to the filing.

With inputs from IANS.