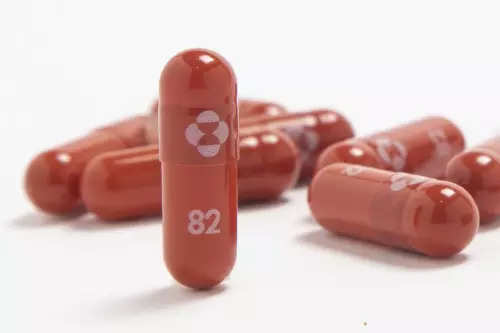 BENGALURU: Doctors have s topped prescribing new antiviral drug molnupiravir, rolled out on January 3 to treat Covid-19, after recent remarks by ICMR over the safety of the drug. Doctors have now urged ICMR to clear the air.

ICMR said the drug could adversely affect an unborn child’s development. If a patient takes molnupiravir, they (both men and women) will need to use a contraceptive for three months, as a child conceived during the period could be affected, I CMR had warned.

Members of Karnataka’s Clinical Advisory Committee for Covid say the drug should not be prescribed for people in the reproductive age group, it is safe for select patients.

“Why weren’t these issues raised while approving the 21 companies that produce the d rug in India or when the D rug Controller General of India (DCGI) approved the drug?” said Dr Satyanarayan a Mysore, HoD, pulmonology, Manipal hospitals, who h as stopped prescribing the d rug. “ICMR should issue a d etailed clarification to clear t he confusion. ”

Besides approval by DCGI, doctors were also guided by scientific reports that app eared in the New England Journal of Medicine which concluded that “early treatment with molnupiravir reduced the risk of hospitalisation or death in at-risk, unvaccinated adults with Covid-19”.
“The drug is being used in the UK and the US. Did the ICMR consider all these facts before stating that it has safety concerns?” asked a Technical Advisory Committee member.

Dr Mysore added: “We can’t prescribe it now since patients are pointing out that ICMR has raised objections. ICMR must issue a clarification and take proactive action by talking to DCGI, and government of India. ”

Multiple hospitals had used the drug over the past week, but usage is now almost at a standstill. “After ICMR flagged concerns, we stopped prescribing it,” said Dr Pruthu Narendra Dhekane, consultant, infectious diseases, Fortis Hospitals, Bannerghatta Road. “We used it on six or seven patients who were definitely outside the reproductive age group. ”

Dr Ravindra Mehta, chief of pulmonary, critical care and interventional pulmonology, Apollo Speciality Hospital, said the drug was used only on a select group which did not include children below 18 years, lactating mothers or youngsters planning to conceive.

“Not just molnupiravir, 99% of the drugs across specialties are not given to pregnant women,” Dr Manjunath said. “I am sure clinicians would not have prescribed the drug to an infected pregnant woman. It’s only a five-day course of medicine to reduce symptoms. The drug was released in the market after clinical trials and scientific research. ”