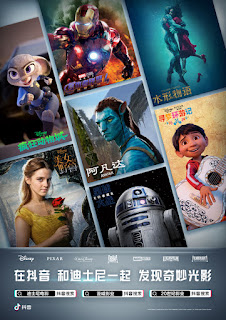 Walt Disney Studios goes by “DisneyStudioCN” on the Douyin app, owned by tech giant ByteDance, and follows the launch of the Disney+ account last year on the app’s international version, TikTok. The move marks Disney’s ambitions for expanding into new territory, hoping to reach China’s young and trendy generation.

The new account has so far published several promotional videos about Disney’s previous and up-coming animated and live-action films, most notably their latest animated feature “Encanto.”

The musical fantasy comedy is the 60th film produced by Walt Disney Animation Studios. It tells the story of Mirabel Madrigal, a member of the Madrigal family who lacks the magical powers of her family but is tasked with saving them after their magic attracts danger. Set in the wondrous land of Encanto, the film features all-new songs by Emmy, Grammy, and Tony Award-winner Lin-Manuel Miranda, while the theme song “Colombia, Mi Encanto” is performed by 17-time Grammy and Lat-in Grammy winner, singer, songwriter, and actor Carlos Vives. For the Chinese version, comedic ac-tress Jackie Li, also known as Lamu Yangzi, will dub the voice for the protagonist Mirabel.

“Encanto” reunites filmmakers Byron Howard, Jared Bush, and Clark Spencer — director, co-director, and producer, respectively, of the 2016 Oscar-winning feature film “Zootopia.” That film proved hugely popular in China, becoming the country’s No. 1 foreign animated feature film of all time and grossing 1.52 billion yuan ($235.59 million). The film prompted Disney to build the world’s first and only Zootopia-themed land in Shanghai Disneyland, with construction of the tallest build-ing in Zootopia city scheduled to be complete in just a few weeks, according to a brief by Shanghai Disney Resort on New Year’s Day.

The Shanghai Disney Resort also launched its own Douyin account on Dec. 21, 2021, and has since published several videos of cute Disney characters greeting users through prerecorded videos at the park, as well as a video of the New Year fireworks display.

How “Encanto” performs in China amid the COVID-19 pandemic remains yet to be seen. On the review aggregator website Rotten Tomatoes, the film has a score of 91% from 179 reviews, with the critical consensus reading: ”Encanto’s setting and cultural perspective are new for Disney, but the end result is the same – enchanting, beautifully animated fun for the whole family.”