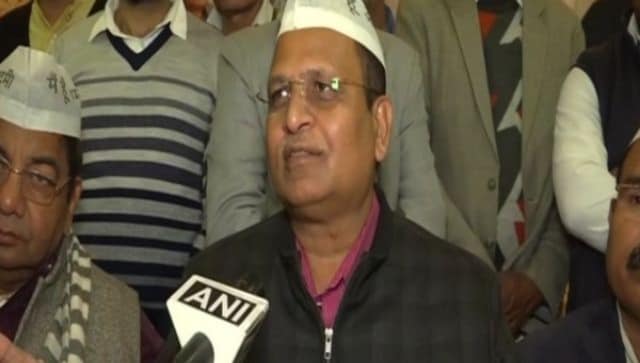 The Enforcement Directorate on Monday morning raided the residence of arrested Aam Aadmi Party (AAP) leader and Delhi minister Satyendar Jain in money laundering case. The searches by the investigating agency comes nearly a week after the minister was sent to ED custody.

On 30 May, Jain was arrested by the ED under sections of the Prevention of Money Laundering Act (PMLA). They alleged he was “evasive” in his replies. The very next day he was produced in a special court which has sent him to ED custody till 9 June.

According to news agency ANI, ED at searches at Jain’s residence in connection with hawala transactions related to a Kolkata-based company.

Meanwhile, news agency PTI said that apart from Jain’s residential premises, searches were carried out in some other locations too as part of a “follow up” in the case.

Jain, 57, holds the portfolio of health, industries, power, home, urban development and water in the Arvind Kejriwal-led Delhi government. The charge of his ministries have been given temporarily to Delhi deputy chief minister Manish Sisodia.

Last week, Delhi chief minister defended his minister, Jain, saying that he is a “hardcore patriot and an honest person and the allegations against him are completely false.”

“I have personally read Satyendra Jain’s case filed by the ED and it is completely fake. All the actions that have been taken by centrally maintained agencies are politically motivated. And in this case, also Jain has been targeted because of political reasons. We have a very honest government, which neither tolerates nor does corruption. This case will not last long, the truth always wins in the end. We have faith in our judiciary,” Kejriwal said.

Don’t Miss: ‘India should be proud of him’: Kejriwal demands Padma Vibhushan for Satyendar Jain who was arrested by ED

Jain was arrested last month after an investigation that dates back to 2015-2016. The ED has alleged that the Delhi minister was involved in hawala transactions with a Kolkata-based firm.

During the probe, it was revealed that in 2015-16, when Jain was working in the central public works department, four firms “beneficially owned and controlled by him” received “accommodation entries (a term used for hawala transfers) to the tune of Rs 4.81 crore from shell companies against cash transferred to Kolkata-based entry operators through hawala route.”

Must Read: Explained: The case against Delhi minister Satyendar Jain and the war of words between AAP and BJP

It was also alleged that Jain had control over these companies, either as director or by holding one-third of the shares of the firm. The investigating authorities also claimed that these firms were shell companies used to park money.

Ukraine Claims It Now Controls "Half" Of Severodonetsk