Deer herd leaps to freedom after being released into the wild, watch heartening video 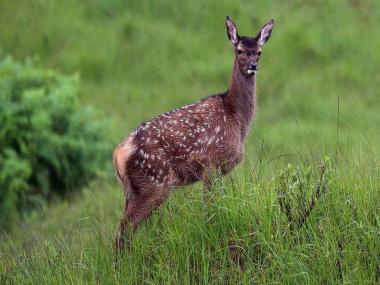 Parveen Kaswan often shares heartwarming videos of wild animals on his Twitter handle. Recently, he shared a video of a Himalayan black dear escaping into the jungle after being released from a vehicle.

A video of a herd of deer running to freedom has left the social media overjoyed. The video was shared by IFS officer Parveen Kaswan on 29 December.

Posted on Twitter, the beautiful video captures the relocation of a deer herd. The herd was released last year as part of the forest department’s prey base augmentation programme.

In the one-and-a-half-minute video clip, forest officials can be seen standing in the middle of a forest. The next moment shows a herd of deer leaping out from a truck. The deer can be seen taking long jumps and vanishing into the wild. Certainly, a leap to freedom!

“This is how freedom looks like. Last year’s Deer translocation, part of our prey base augmentation programme,” Kaswan tweeted.

Relying on his own post, he said that the herd of deer was released around 5 am in the core of a protected area.

Since being shared, the heartening video has garnered more than 47,000 views. The post has also accumulated over 2,700 likes. People expressed their feelings by dropping comments on the video.

Sharing the video, a user wrote, “Same should be done to all the wild animals at the #zoo”.

“What a moment for them (deer),” wrote another user.

“That jump of Joy”, said a third user said after sharing the video.

Parveen Kaswan often shares heartwarming videos of wild animals on his Twitter handle.  Recently, he shared a video of a Himalayan black dear escaping into the jungle after being released from a vehicle.

Such videos highlight the importance of maintaining and conserving the natural habitat of animals. These videos also encourage people to respect wild animals rather than hunting them down.

Animals vs. humans vs. machines: who’s got smarts?