If elected, she would become the third Shinawatra to lead Thailand after her father and aunt – both of whom were removed by military coups. 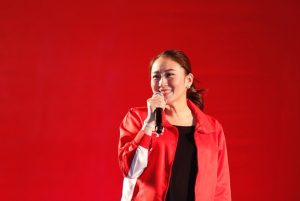 Paetongtarn Shinawatra, the daughter of Thailand’s former leader Thaksin Shinawatra, has officially thrown her hat into the ring for this year’s election, declaring her readiness to run for prime minister.

The 36-year-old will head the Pheu Thai Party, currently the largest party in Thailand’s parliament and the current avatar of the populist Thai Rak Thai party that her father rode to victory in 2001.

“Yes, I am ready,” she told reporters late on Sunday in northeast Thailand, Reuters reported. “We want the party to win the election by a landslide so the promises we made to the people can be realized.”

If elected, Paetongtarn would become the third member of the Shinawatra clan to serve as prime minister, after her father and aunt Yingluck Shinawatra. Both were removed from power by military coups d’etat.

Indeed, political parties aligned with Thaksin have won the most seats in every general election since 2001, lending the current campaign a definite sense of deja-vu. Last month, Paetongtarn launched a populist program designed to replicate this string of electoral victories, to springboard the Thaksinite movement back to power, and end nearly a decade of rule by military-backed governments. She pledged to “help rebuild our country and improve the livelihood of Thai people.”

So far, there seems to be a good chance of history repeating. A survey conducted by the National Institute of Development Administration late last month found that Paetongtarn was Thailand’s top choice to become the country’s next leader. Around 34 percent of respondents said that she was their preferred prime minister, up from 21.6 percent in September. The next two choices were Prime Minister Prayut (14.05 percent) and Pita Limjaroenrat, the leader of the opposition Move Forward Party (13.25 percent).

Should Paetongtarn win and Pheu Thai secure a substantial majority, it is worth pondering whether the outcome will be any different. After his thundering electoral victory in 2001, a populist campaign that won hearts and minds across the rural north and northeast, Thaksin’s movement came to be seen as a serious – in some views, existential – threat to Thailand’s traditional conservative elite. In the subsequent years, this military-royalist elite did everything that it could, from judicial chicanery to outright military intervention, to extricate Thaksin from Thai politics and prevent his proxies from holding power.

There is no indication that anything has changed on this front. Whether or not a Pheu Thai government would pave the way for Thaksin to return from self-exile, the possibility of this is something that the establishment has gone to great lengths to prevent – and it can be expected to do so again.