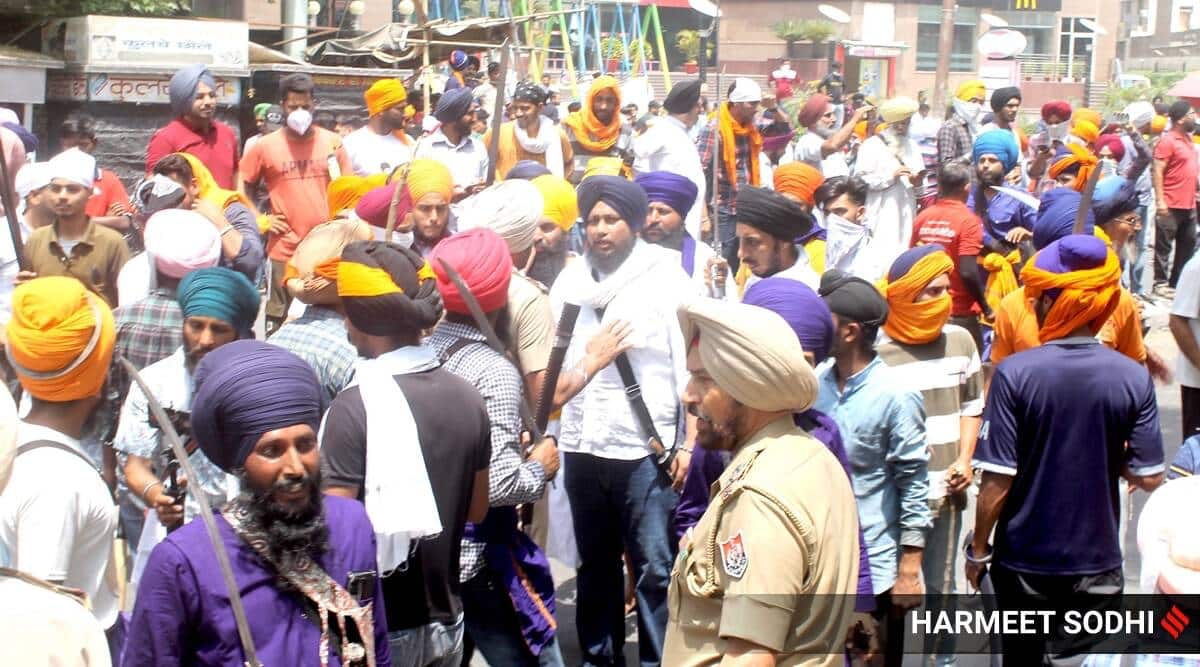 Curfew was imposed in Punjab’s Patiala city from 7 pm today till 6 am on Saturday after two groups clashed during a protest march held against banned terrorist outfit Khalistan today. Stones where hurled in the brawl leaving two people injured. Police fired in the air to bring the situation under control.

The clash took place outside the Kali Mata temple when members of an outfit that calls itself Shiv Sena (Bal Thackeray) began a “Khalistan Murdabad March”. Some Sikh activists, including Nihangs, took out another march against the Sena event.

Near the Kali Mata temple, the two groups came face to face and hurled stones at each other. The temple gates were locked and police deployed in large numbers to prevent the situation from escalating further in the city, police said. Two people, including a policeman, were injured, in the stone-pelting, they added.

A Sena leader said the outfit had planned the march as a reply to the announcement by Sikhs for Justice to mark the “foundation day of Khalistan” on April 29.

Patiala Inspector General of Police Rakesh Agarwal said that the situation was now under control. “We have called force from outside. A peace committee meeting has been called by the Deputy Commissioner,” he said, adding restoring peace in the area was the priority for police at present.

Punjab Chief Minister Bhagwant Mann termed the incident unfortunate and said he was in touch with the state police chief. “The incident of clashes in Patiala is deeply unfortunate. I have spoken to the DGP; peace has been restored in the area. We are closely monitoring the situation and will not let anyone create disturbance in the state,” Mann said in a tweet.

He said Punjab’s peace and harmony are of utmost importance. Asked about the incident, IG Agarwal said the incident took place as “some mischievous elements had spread some rumours. We have controlled the situation. We are also conducting a flag march in Patiala city”.

Asked how many people have been injured in the incident, Agarwal said police are still checking it.

The “Khalistan Murdabad March” was organised by ‘Shiv Sena (Bal Thackeray)’ leader Harish Singla. The march started from Arya Samaj Chowk with the Sena activists raising the “Khalistan Murdabad” slogan. Singla said Gurpatwant Pannun of the Sikhs for Justice had announced to observe April 29 as the “foundation day of Khalistan”.

“To answer them, the Sena had also decided to take out ‘Khalistan Murdabad March’ on April 29,” he said. Patiala Deputy Commissioner Sakshi Sawhney said, “We appeal to all to maintain calm and not to lend credence to any rumour.”

“Peace and harmony are central to all our religions and their basic ethos. Even if there is any dispute or misunderstanding, it is important to resolve it by dialogue,” Sawhney said in a statement. “The Patiala district administration appeals to all brothers and sisters of Patiala and Punjab to continue to maintain peace and brotherhood,” he said.

“The present situation is under control and being continuously monitored. All measures are being taken to ensure peace and harmony,” he added

Can the Eurasian Economic Union Survive Putin? – The Diplomat