The ruling by Judge Marlo Magdoza-Malagar stated that the New People’s Army used violence as a means rather than an end. 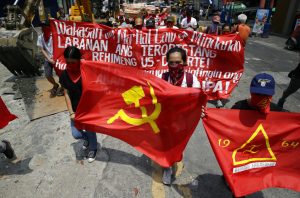 Patriotic Youths group protesters rally to commemorate the 49th anniversary of the New People’s Army, the armed wing of the Communist Party of the Philippines, in Manila, Philippines on March 21, 2018.

A court in the Philippine capital Manila has dismissed a Department of Justice (DOJ) petition seeking to declare the Communist Party of the Philippines (CPP) and its armed wing as “terrorist” groups. In a ruling that was signed on Wednesday, Manila regional trial court Judge Marlo Magdoza-Malagar argued that the CPP and its armed wing, the New People’s Army (NPA), did not fulfill the criteria necessary to make such a designation.

Among the several lines of reasoning advanced in the ruling, one was that the groups were engaged in a rebellion rather than terrorism. Another was that the use of violence was their means rather than their end.

“While the armed struggle with the violence that necessarily accompanies it is indubitably the approved means to achieve the CPP-NPA’s purpose, means is not synonymous with purpose,” stated the ruling, according to a report by BenarNews. “Armed struggle is only a means to achieve the CPP’s purpose; it is not the purpose of the creation of the CPP.”

The ruling added that “while both rebellion and terrorism may involve the use of violence, the violence in rebellion is directed against government or any part thereof,” rather than being designed “to sow and create a condition of widespread and extraordinary fear and panic among the populace.”

The CPP-NPA has been waging an armed struggle against the central government since 1969.

The move is a setback for the DOJ, which filed the petition in 2018. If approved, it would have been granted additional powers to rifle through the bank accounts of members and leaders of the CPP-NPA.

It is a legal victory of equal magnitude for activists and government critics, though a somewhat Pyrrhic one. As the BenarNews report explains, the DOJ’s initial petition cited the Human Security Act of 2007 as a basis – a law that was repealed in 2020 with the Philippines’ adoption of the controversial Anti-Terror Act. The government can still seek to have the groups declared “terrorist” under this new law, even as it appeals this week’s verdict.

But Magdoza-Malagar’s ruling was significant in setting a precedent that any other ruling will have to take into account. It also raised concerns about “red-tagging,” a practice in which senior officials link political activists to communist insurgents, exposing them to arrest or violent attacks. While not posing an existential threat to the Philippine government, the persistence of the CPP-NPA insurgency has offered officials a convenient way of smearing government critics and discrediting movements for social and economic justice.

According to the advocacy group Human Rights Watch (HRW), the practice of “red-tagging” became much deadlier under President Rodrigo Duterte, who was in office from 2016 until this past June. Duterte created the National Task Force on Ending Local Communist Armed Conflict, staffed with and headed by former military officials. According to HRW, the task force engaged in frequent red-tagging – of activists, critics, and left-wing political leaders – through its social media posts and official pronouncements.

This week’s court ruling described red-tagging as a “pernicious practice” that endangered government critics, and called  on the government to show “respect for the right to dissent, to due process, and to the rule of law.”

Are Central Asians Being Conscripted by Russia to Fight in Ukraine? – The Diplomat

ED notices to Shabbir Ali and 3 other Congress leaders