The party has embarked on the digital membership drive for the first time in its 135 year old history and it will form the basis for internal elections as well as organisation building, said AICC general secretary Organisation, K C Venugopal 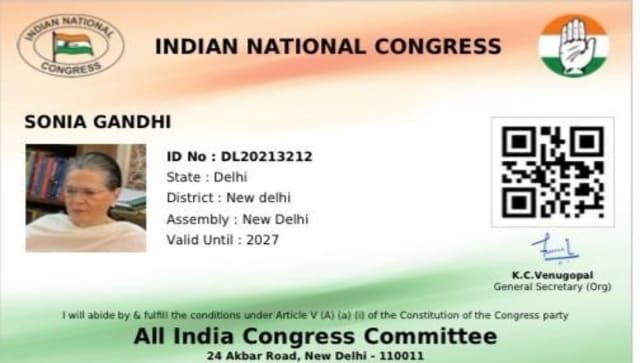 Congress President Sonia Gandhi enrols as digital member of the Congress on the last day of the digital membership drive on Friday. Twitter/@INCIndia

New Delhi: The Congress has added 2.6 crore new members in its digital membership drive that ended on Friday, with party chief Sonia Gandhi enrolling herself as part of the initiative.

Unlike previous years, the CWC this time decided to implement the digital membership drive in addition to the standard paper membership process for the period 2022-2027, the party said.

“It is a matter of happiness that the digital membership drive has evinced great interest from people of the country, especially younger supporters of the Congress party,” AICC general secretary Organisation, K C Venugopal said in a statement.

He said through the digital membership drive, the Congress party has so far added 2.6 crore members across all booths in all Assembly segments.

These are all verified members, enrolled into the party by a designated enroller using a proprietary mobile phone app called Congress Membership App, he said.

Besides, the Congress is also enrolling the members through the physical/ paper membership copies and the total membership will be known in some days after verification of documents.

Every digital member after verification gets a digital ID card that is QR coded for authenticity, Venugopal said, adding that a network of over 5 lakh party approved enrollers went door to door to enrol members across the length and breadth of the country.

“Ever since we started the drive, the key focus has been on quality of membership, not just quantity. Every member is verified at three levels – voter ID, photograph and phone number. The drive is strictly access controlled and only verified enrollers can use the membership app,” said Praveen Chakravarty, chairman of AICC Data Analytics department which is spearheading the digital drive.

The party has embarked on the digital membership drive for the first time in its 135 year old history and that will now form the basis for internal elections as well as organisation building, Venugopal said.

The membership drive was to end on 31 March but was extended for 15 days till 15 April following keen interest by many, the party said.

With the Congress organisational polls underway, the party would have a new party president between 21 August and 20 September this year and thereafter, elections to the CWC would be held by October at the All India Congress Committee Plenary session.

The district Congress committees will publish the list of members and the eligible candidates for various party bodies between 1 and 15 April, followed by the election of the president and executive committees at the block levels. This process would be completed between 16 April and 31 May, the party has said.

The elections at the Congress district committee levels for deciding local presidents, vice presidents and treasurers will happen between 1 June and 20 July. Election to PCCs would be held between 21 July  and 22 August.