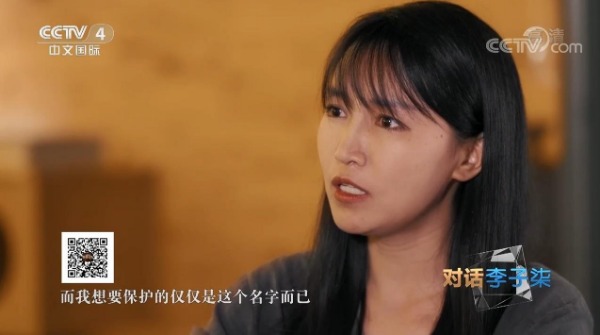 (China Daily) Hangzhou Weinian, a multi-channel network behind the stardom of vlogger Li Ziqi, said it has never controlled any accounts related to China’s most famous YouTuber in a first public response released Nov 1 about a business dispute between both parties.
Li, who raked in more than 2.4 million views and 16 million subscribers on YouTube, holds a Guinness World Record for “The most subscribers for a Chinese-language channel on YouTube” as of Aug 21. The vlogger has captured the tranquility of life in rural China and offered viewers around the world a picturesque escape from the urban bustle.
To date, three months haves passed since Li’s latest update: Firewood, Rice, Oil, Salt, Soy Sauce, Vinegar, and Tea. Prior to that, Li had updated her channel roughly once every month. The 31-year-old has been busy, not working in the fields, but resolving legal issues.

On Aug 30, Li posted a photo of herself filing a report at a police station, and wrote a reply under the post: “I have asked lawyers to keep records, this is so scary! Capital indeed has its good tricks!” Her words hinted at a legal dispute between herself and the company that helped catapult her to stardom, Hangzhou Weinian.
The reply was later deleted.

On Oct 25, Li filed a lawsuit against Hangzhou Weinian through her company Sichuan Ziqi Culture Communication.
Li and Hangzhou Weinian joined hands in 2016. Through this partnership, Li unleashed her talents through content creation, and Hangzhou Weinian helped her promote them to the world.
The two worked together yet separately, but it seems irreconcilable disagreement arose. In its official statement, Hangzhou Weinian said it has “never interfered, or thought about interfering with any accounts related to Li Ziqi”, giving insight into a dispute over what Li publishes in her creations. 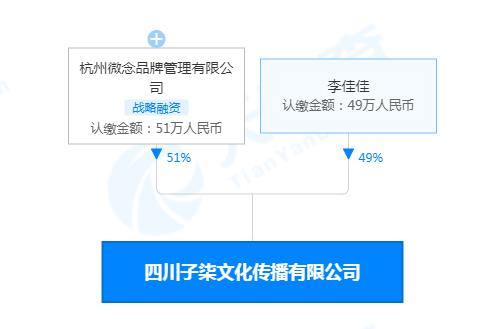 Tianyancha, an enterprise search engine, shows Hangzhou Weinian owns a 51 percent share of Sichuan Ziqi Culture Communication, while Li has the remaining 49 percent stake. This led to many speculating the dispute arose from Li’s minority ownership of her own company.
Li herself has refrained from elaborating since Aug 30, but her assistant has voiced her own opinion through her verified Sina Weibo account on several occasions.
On Aug 26, Li’s assistant said the vlogger had “neglected many real-world problems” while devoting herself to content production, and needed some time to resolve issues. On Sept 13, the assistant said Li was dealing with a problem involving her own company and a third-party company, without providing further details.
Yesterday, an hour after Hangzhou Weinian released its statement, Li’s assistant denied equity as the source of dispute in a Sina Weibo post. 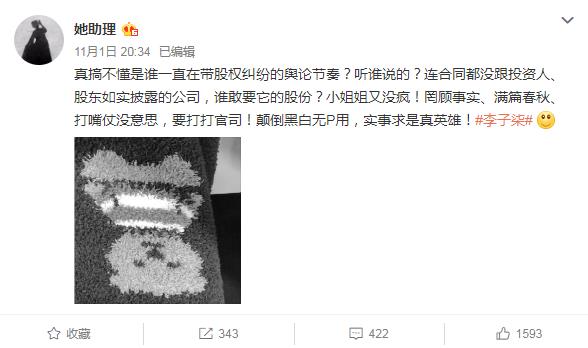 “I really don’t understand who has been leading the public opinion on an equity dispute? Who? Who dares to take the shares of a company that has not even disclosed its practice contract to investors and shareholders?
“There is no point fighting a war of words, we need to fight with a lawsuit!” she added.
Although Li has not made any comments on the lawsuit, she did mention she wanted to protect her name and her content during a recent interview she gave to China Central Television.
“I don’t want to give it so-called very high commercial value. I believe it’s a double-edged sword, and I just want to protect this name.”
She also mentioned three things she hoped to do in the near future: do her part in rural revitalization, help pass on intangible cultural heritage and traditional Chinese culture, and guide youth on the right path.
“When asked ‘What do you want to be when you grow up?’, I hope our children won’t answer ‘I want to be an influencer’ or ‘I want to be a celebrity’. That’s not what I hope to see. I hope they can possess the right values, study hard, and truly become a person who is able to grasp every opportunity,” Li said.
Source: By Gu Xin | chinadaily.com.cn | Updated: 2021-11-02 14:07

‘Revolution of Our Times,’ ‘The Falls’ Triumph at Golden Horse Film Awards |

Tencent Unveils Three Computer Chips of Its Own Design |

Ravichandran Ashwin back in fashion