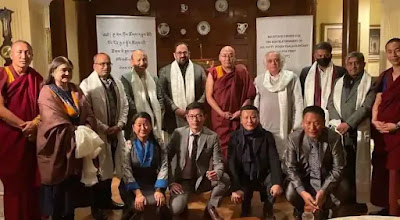 The Chinese embassy has shot off an angry letter to some Indian MP or ministers of Parliament who attended a meet organised by the Tibetan govt in exile.
The Indian MPs who participated in the meet were – Jairam Ramesh, Manish Tiwari, Sujeet Kumar, Rajeev Chandrashekhar, Ramdas Athawale, Maneka Gandhi. The letter by Political Counsellor, Chinese Embassy to India Zhou Yongsheng calls on Indian MPs to not engage with “out-and-out separatist political group and an illegal organization”.
It further points, “Indian government has recognized that the Tibet Autonomous Region is part of the territory of the People’s Republic of China” and Beijing “firmly opposes any anti-China separatist activities conducted by ‘Tibetan independence’ forces in any capacity”.
The letter is seen as a wolf warrior diplomacy by China, part of a global trend by its diplomats who have been doing this in past and across the world. The letter in a derogatory tone chided, “You are a senior politician who know the China-India relations well. It is hoped that you could understand the sensitivity of the issue and refrain from providing support to the ‘Tibetan independence’ forces”.
Not all MPs got the letter. When asked, MP Manish Tiwari who was present at the event said “neither have I received any letter nor will I demean or diminish myself by responding to such imbecile missives. Had Wang Yi written perhaps I would have considered responding”.
Meanwhile, the Tibetan govt in exile has reacted strongly to the development. In a series of tweet-statement, Tenzin Lekshay, Spokesperson of the Central Tibetan Administration said, “Tibet issue is certainly not an internal issue of China. Whatever happens in Tibet is a serious matter of concerns for all the people around the world.” He added, “China must stop growling here & there all the time.”
It’s not the first time the Chinese embassy has sent such a letter, in the past it wrote a letter to MP Sujeet Kumar for participating in a meet organised by the Taiwan government.
Biju Janata Dal (BJD) Rajya Sabha MP Sujeet Kumar has received a letter from the China Embassy in New Delhi asking him to avoid such participation with Taiwan’s so-called Formosa Club.
Taiwan’s The Formosa Club main objecting is to enhance friendship with the Indo-Pacific countries and to ensure peace stability in the Indo-Pacific region and it was organised by Taiwan MoFA.
The Chinese embassy has a number of times written letters to WION as well after its reports on Taiwan. Many of these letters have threatened WION and asked it to abide by one-China policy.

The Rise Of Domestic TWS Earbuds Brands In India

Giving Them A Chance To Shoot