A security surveillance camera overlooking a street is pictured next to a nearby fluttering flag of China in Beijing, China November 25, 2021

NEW DELHI: China has accelerated settlement-building along its disputed border with Bhutan, with more than 200 structures, including two-storey buildings, under construction in six locations, according to satellite image analysis conducted.

The images and analysis supplied to Reuters by U.S. data analytics firm HawkEye-360, which uses satellites to gather intelligence on ground-level activities, and vetted by two other experts, provide a detailed look into China’s recent construction along its frontier with Bhutan. 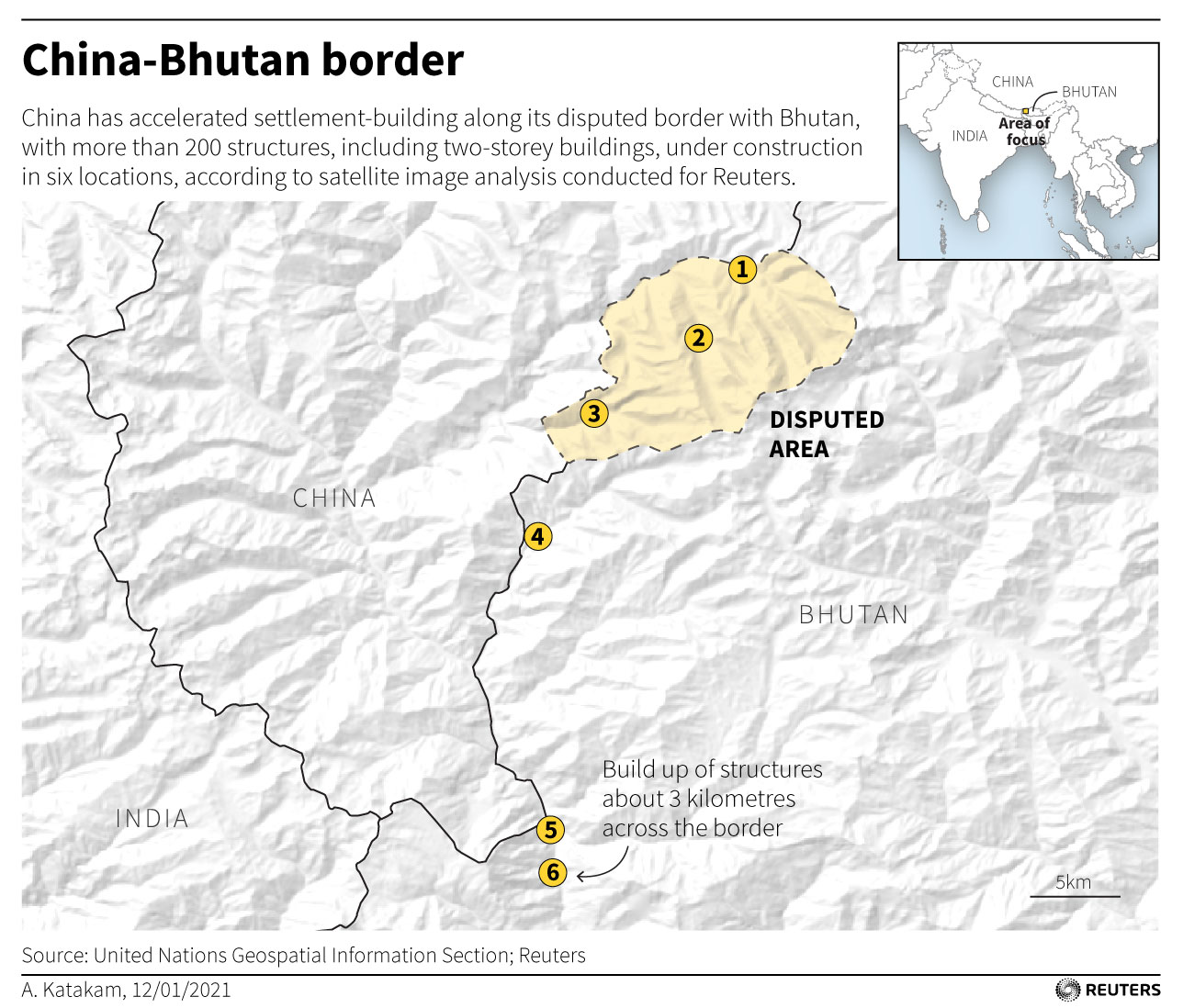 China has accelerated settlement-building along its disputed border with Bhutan, with more than 200 structures, including two-storey buildings, under construction in six locations, according to satellite image analysis conducted for Reuters.

Construction-related activity in some of the locations along Bhutan’s western border has been under way since early 2020, with China initially building tracks and clearing out areas, based on material provided by satellite imagery firms Capella Space and Planet Labs, said Chris Biggers, the mission applications director at HawkEye-360.

Images show the work speeded up in 2021. Smaller structures were erected – possibly to house equipment and supplies – followed by the laying of foundations and then the construction of buildings, Biggers said.

“To me, 2021 was the period for acceleration,” Biggers said.

Two other experts who studied the locations of the new construction and recent satellite images taken by Capella Space said all six settlements appear to be in territory disputed by China and Bhutan – including a contested tract of roughly 110 square kilometres – with little in the way of resources or native population.

“It is Bhutan’s policy not to talk about boundary issues in the public,” Bhutan’s foreign ministry said in response to questions from Reuters. The ministry declined to comment further.

The construction suggests that China is bent on resolving its border claims by giving its ambitions concrete form, said the experts and one Indian defence source.

China’s foreign ministry said the construction is “entirely for the improvement of the working and living conditions of the local people.”

“It is within China’s sovereignty to carry out normal construction activities on its own territory,” the ministry said. The ministry declined to comment further.

The villages also offer Beijing some strategic value, two of the experts say. The new construction is 9 to 27km from the Doklam area at the junction of the borders of India, Bhutan and China, where Indian and Chinese troops were locked in standoff for more than two months in 2017.

The settlements would allow China to better control and monitor far-flung areas, and potentially use them to establish security-focused installations, according to one expert and the Indian defence source.

India’s foreign ministry did not respond to a request for comment.

Bhutan, a country of less than 800,000 people, has been negotiating with Beijing for almost four decades to settle their 477-km border. At issue for Bhutan is not just territorial integrity, but also concerns over the potential security implications for India, which is the Himalayan kingdom’s main ally and economic partner.

The Bhutanese foreign ministry said Bhutan and China had agreed during the latest round of boundary negotiations in April 2021 to speed up the process of resolving their differences. It declined to discuss the details of the plan to do so.

“All issues are discussed between Bhutan and China within the framework of the Boundary Talks,” the ministry said.

“China’s village building across the claimed Bhutan border appears to be designed to force Bhutan to yield to Chinese demands in their border negotiations, now in their 24th round after 37 years,” said Robert Barnett, a professorial research associate at SOAS University of London, who is an expert on Tibet and has studied the China-Bhutan border closely.

The settlements appear part of a plan Beijing made public in 2017 to build more than 600 villages in border areas in the Tibet Autonomous Region (TAR), which lies on the Chinese side of the disputed border, said Barnett and M. Taylor Fravel, director of the Security Studies Program at the Massachusetts Institute of Technology.

The Chinese-controlled TAR was established in 1965, six years after the Dalai Lama fled Tibet in the wake of a failed uprising against Chinese rule.

Some of the villages near the border are built where there has been no previous construction. China’s government gives residents subsidies to settle there, Barnett said.

“All the cross-border villages in the western Bhutan sector are sited in areas where no natural village would be found, since these areas are barely habitable,” he said

Control over the remote Doklam plateau would potentially give China greater access to the adjoining “Chicken’s Neck” area, a strategic strip of land that connects India to its north-eastern region.

India shares an unsettled 3,500-km border with China. Troops from both countries remain deployed near each other in a separate border dispute in the Ladakh region – about 1,100km from Doklam – where they clashed in hand-to-hand combat in 2020.

India has been closely monitoring Chinese construction along its borders, the Indian defence source said, declining to be named because of the sensitivity of the matter. 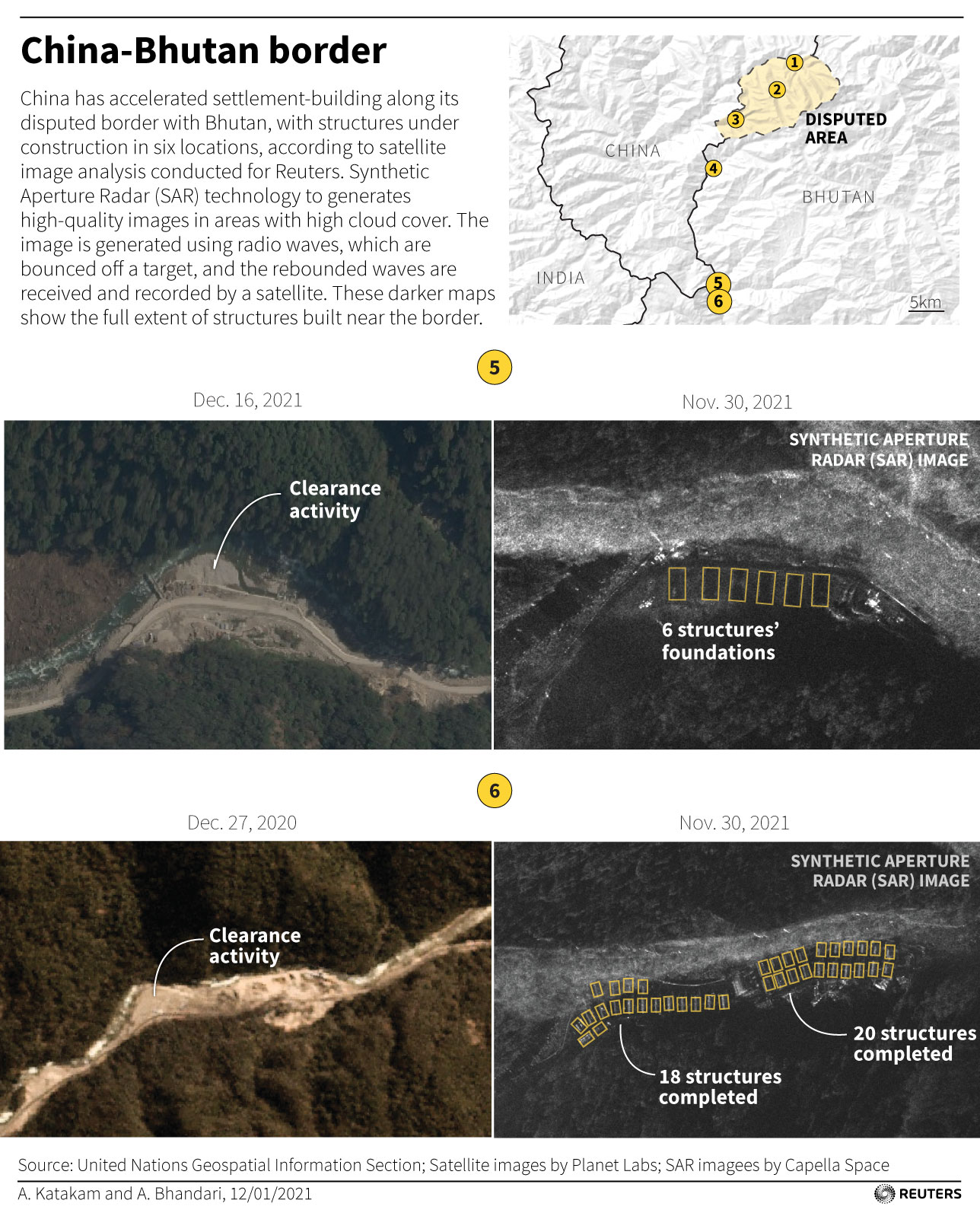 The satellite imagery suggests that neither India nor Bhutan has responded on the ground to China’s construction activities, Biggers said.

Nathan Ruser, a researcher at the Australian Strategic Policy Institute research organisation, added that it would be a challenge for India and Bhutan to counter the Chinese construction.

“Any action taken against these Chinese installations would necessarily put civilian populations at risk,” Ruser said. “It limits the ways in which India and Bhutan are able to combat Chinese encroachment into disputed territories.”

Powerful Bomb Rips Through Market in Lahore – The Diplomat

China puts emphasis on employment and settlement of military families