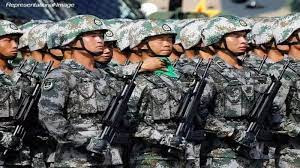 China announced that it has “standardised” official names for 15 places in Arunachal Pradesh. The Indian government rejected the renaming of places and asserted that the state has “always been” and will “always be” an integral part of India.
hina today announced that it has “standardised” official names for six places in Arunachal Pradesh and termed the provocative move as a “legitimate action”, days after Beijing lodged strong protests with India over the Dalai Lama’s visit to the frontier state.
The state media here said the move was aimed at reaffirming China’s claim over Arunachal Pradesh. China claims the state as South Tibet.
“China’s Ministry of Civil Affairs announced on April 14 that it had standardised in Chinese characters, Tibetan and Roman alphabet the names of six places in South Tibet, which India calls Arunachal Pradesh, in accordance with the regulations of the central government,” state-run Global Times reported today.
The official names of the six places using the Roman alphabet are Wogyainling, Mila Ri, Qoidengarbo Ri, Mainquka, Bumo La and Namkapub Ri.
“These names reflect China’s territorial claim over South Tibet (Arunachal Pradesh), which is supported by clear evidence in terms of history, culture and administration,” Chinese Foreign Ministry spokesman Lu Kang told reporters here.
Defending the action to standardise the names, Lu said, “to issue these names is actually carried out in accordance with the regulations about the names of the localities and it is a legitimate action by the Chinese government”.
“Let me stress that about the Indian government’s indulgence of the Dalai Lama activities in disputed eastern section of the India-China boundary and also about his anti- China activities, this is something we are firmly against. These activities are also against the Indian government’s commitments to China,” Lu said when asked about the significance of standardisation of names.
Asked why it took China so long to standardise the names and whether the sudden move was in retaliation to the Dalai Lamas recent visit to Arunachal Pradesh, Lu said, China chose this time to announce the standardisation as it was now doing a second census of names of localities and an important part of it was to standardise names in ethnic languages.
He said more standardised names will be announced later.
THESE AREAS BELONG TO CHINA: CHINESE FOREIGN MINISTER
“In the next step, we will also step up our study of those names in Tibetan ethnic languages and in the next step we will announce more standardisation of these names,” he said.
Reiterating that Chinas claims over the east section of India-China boundary in Arunachal Pradesh were clear and consistent, Lu said, “these names have been passed on from generation to generation by people who have lived there for generations, the Tibetan ethnic and Monpa ethnic groups.”
“It is also an example that shows China has clear administration over these areas and there are many activities by the Chinese people in that area,” he said.
Chinas move comes just days after the Dalai Lamas visit to Arunachal Pradesh, which was seventh since the 81-year-old spiritual leader fled from Tibet through Tawang and sought refuge in India.
During the Dalai Lamas Arunachal Pradesh visit, China had warned India that it will take “necessary measures” to defend its territorial sovereignty and interests.
The India-China border dispute covers the 3,488 km-long Line of Actual Control (LAC). While China claims Arunachal Pradesh as South Tibet, India asserts that the dispute covers Aksai Chin area which was occupied by China during the 1962 war.
The two sides have so far held 19 rounds of Special Representatives talks to resolve the boundary dispute.
Commenting on the standardisation of the names of six places, Chinese experts said that it was a move to “reaffirm the country’s territorial sovereignty to the disputed region”, according to the Global Times.
“The standardisation came amid Chinas growing understanding and recognition of the geography in South Tibet. Naming the places is a step to reaffirm Chinas territorial sovereignty to South Tibet,” Xiong Kunxin, a professor of ethnic studies at Beijings Minzu University of China, was quoted as saying.
Xiong said that the legalisation of the regions names is a part of the rule of law.
“These names have existed since ancient times, but had never been standardised before. Therefore, announcing the names is like a remediation,” Guo Kefan, a research fellow at the Tibet Academy of Social Sciences, said.
Standardising the names from the angles of culture and geography could serve as a reference or leverage when China and India negotiate border issues in future, Guo said.
“The South Tibet region is located alongside Chinas southwestern border and Indias north-eastern border where Sino-Indian border disputes are cantered,” the report said.
It claimed that India “abruptly announced that it was officially designating the region as Arunachal Pradesh but the Chinese government has neither recognised Indias occupation of the region, nor the legitimacy of the province”.
During the Dalai Lamas Arunachal Pradesh visit, Union Minister of State for Home Affairs Kiren Rijiju, who accompanied the Tibetan spiritual leader, had asserted that that Arunachal Pradesh is “an inseparable part of India”.
China had lodged a diplomatic protest with India over the visit and warned that it would have a negative impact on the efforts to resolve the border dispute.
After the nine-day visit of the Dalai Lama to Arunachal Pradesh, Chinese Foreign Ministry spokesman Lu had said that India should not use the Tibetan spiritual leader to undermine Chinas interests.