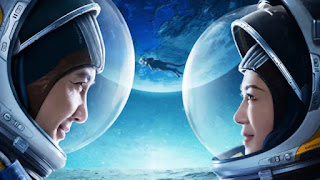 (THR) A heartwarming sci-fi comedy about a Chinese astronaut who believes he’s the last human alive has revived China’s box office in spectacular fashion. Moon Man, directed by Zhang Chiyu of the hit-making comedy troop Mahua FunAge, opened to $148 million over the weekend, including pre-sales, according to data from Artisan Gateway. Local ticketing app Maoyan projects the film to earn over $640 million (RMB 4.34 billion) before it leaves Chinese screens, which would make it the country’s sixth-biggest film of all time.

Like a more whimsical version of The Martian, Moon Man stars Shen Teng (Goodbye Mr. Loser) as a Chinese astronaut on the moon who comes to believe he’s the last human in the universe after witnessing an asteroid collide with earth. In truth, earth’s many survivors, including his dream girl (Ma Li), are watching his every move via a live-stream.

The film has delighted both Chinese critics and mainstream moviegoers, earning social scores of 9.3 from Maoyan, 9.5 on Tao Piao Piao, and 7 from Douban’s movie buff users.

A key figure of the Mahua FunAge troop, Zhang burst onto the Chinese film scene with his directorial debut Never Say Die in 2017. The film earned $333 million, the third-biggest total in China that year. Other hits from Mahua FunAge, a theater group turned TV and film producer include, Goodbye Mr. Loser (2015; $228 million) and Hello Mr. Billionaire (2018; $367 million).

Moon Man’s success was cheered across the Chinese film industry, which has continued to struggle throughout 2022 amid Beijing’s “zero COVID” approach to the pandemic, as citywide lockdowns regularly shutter cinemas and suppress consumer sentiment. Overall, China’s total movie ticket revenue in 2022 is 33 percent below last year.

In an interview with the Chinese state press, Zhang addressed the industry’s recent struggles, saying, “The difficulties are always temporary, and they will pass. We will overcome.”

Why we, the people of India, have a problem with male nudity but not its female version?-Opinion News , Firstpost

Here’s how India can counter it