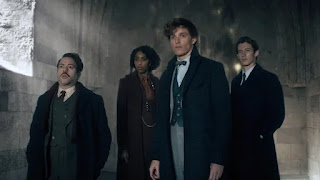 (Variety) China’s theatrical box office fell to a new low over the weekend as anti-COVID restrictions forces thousands of cinemas to close.

Data from consultancy Artisan Gateway showed that nationwide box office across the world’s most populous country amounted to just $10.5 million. That was the lowest scoring weekend of 2022 and means the year-to-date cumulative at $2.42 billion is now running some 28% below last’s equivalent figure.

Major cities in China are currently operating under a range of restrictions that range from citywide lockdown (Shanghai) to so-called static management (Suzhou) which also involve government-mandated restrictions on entertainment.

“Fantastic Beasts: The Secrets of Dumbledore” held on as the top film for a second weekend, but with receipts of just RMB19.1 million ($3 million). After ten days in mainland Chinese cinemas, the film has amassed RMB93.3 million ($14.6 million).

Chinese crime action film, “Man on the Edge” released officially on Friday and earned RMB15.7 million ($2.7 million) for second place over the weekend. Including its extensive previews, the iQiyi Pictures-backed film has a cumulative of RMB42.2 million ($6.6 million).

“Hotel Transylvania 4” slipped back to third place with a weekend score of RMB8.1 million ($1.3 million). It now has a cumulative of RMB50.7 million ($7.9 million) since releasing on April 3.

It is the third Indian film to release in mainland Chinese cinemas this year since a thawing of previously frosty diplomatic relations. But the moves are timid at best and consist of releases of older titles, rather than current movies.

January saw the release of 2019 film “Chhichore.” That was followed in March by the release of 2018 Tamil-language film “Kanaa.” Neither were allocated significant number of screens or released in peak season, and neither made the kind of impression that previous Indian blockbusters “Andhadhun” or Aamir Khan-starring hits “Dangal” and “Secret Superstar” achieved. “Kanaa” is still on release and has accumulated just $490,000 after a month in cinemas.

The uphill task for “Drishyam” in China was made steeper still by the film being given a release after its hit Chinese remake “Sheep Without A Shepherd.” “Sheep” was released in late 2019 and grossed $191 million over a career that included a five-month COVID-hiatus in 2020.