Check out his cheetah shots

On the occasion of his 72nd birthday, Prime Minister Narendra Modi on Saturday released two of eight cheetahs brought from Namibia into a special enclosure at the Kuno National Park (KNP) in Madhya Pradesh and clicked some photographs of the spotted animals Prime Minister Narendra Modi takes pictures of the cheetahs brought from Namibia and released into a special enclosure at the Kuno National Park (KNP) in Madhya Pradesh on Saturday. PIB

New Delhi: On the occasion of his 72nd birthday, Prime Minister Narendra Modi on Saturday released eight cheetahs brought from Namibia into a special enclosure at the Kuno National Park (KNP) in Madhya Pradesh as part of the programme to reintroduce the feline in India seven decades after it was declared extinct in the country.

He also clicked some photographs of these spotted animals on a professional camera after releasing them into the enclosure. Here are some of the pictures which he took of the new guests: 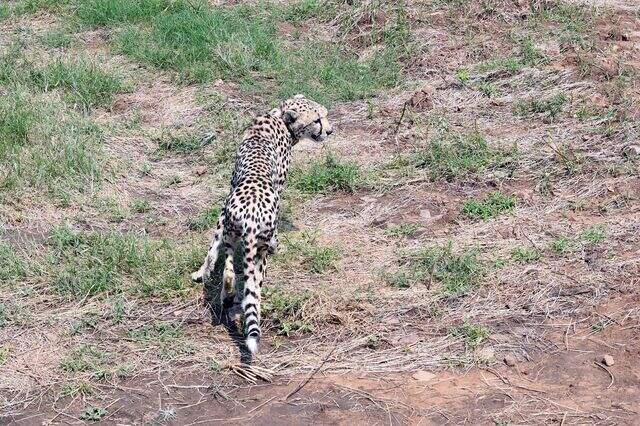 But this is not the first time that the prime minister dawned the cap of a photographer. In 2016, during his visit to Chhattisgarh to mark the state’s 16th foundation day celebrations, he decided to showcase his photography skills. In Naya Raipur, Modi took a few photographs of a tiger.

In 2015 on World Photography Day, Modi shared a photograph from his visit to Seychelles:

The prime minister’s photography skills were first seen by his party workers in 1988, a year after he moved from the Rashtriya Swayamsevak Sangh (RSS) to the BJP and scripted party’s first victory in Ahmedabad municipal elections, reports CNN-News18. That year, PM Modi embarked on Kailash Mansarovar yatra.

Modi, wanted to show his colleagues Lake Manasarovar and the tranquility of the hills. After returning from the yatra, he wanted to show that he wasn’t just an amateur photographer but also one who could showcase his hobby through transparency sheet. He had specially clicked photographs using this medium so that they could be converted into slides and shown to party colleague through a projector, it reported.

Under the banner of ‘Club of Karnawati’, the then Gujarat BJP general secretary held his photo exhibition, at a time when printing pictures on transparency film sheets were not common.

According to Ahmedabad-based photographer Shailesh Rawal when Lal Krishna Advani fought his first Lok Sabha elections from Gandhinagar seat in 1991, Narendra Modi was juggling between political work as Gujarat BJP general secretary and enhancing skills as a photographer.

In those days, Modi owned a ‘Yashica SLR’ camera. It wasn’t an automatic camera that would click a perfect picture by just pressing a button. SLR cameras were used only by people who knew in detail about aperture, shutter, flash, lens and other photography techniques in order to adjust these in the right manner before taking a picture.

Even when digital cameras arrived in the markets, Modi was as enthusiastic about the new equipment as he was about the older versions of the camera. From Pentax K1000 to Canon Mark III camera, the BJP leader adapted the changes in the photography world and its development.