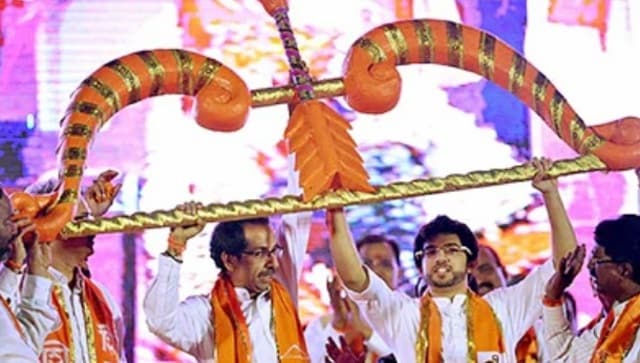 File image of Uddhav and Aditya Thackeray at a Dussehra rally. PTI

New Delhi: In a major relief to the Uddhav Thackeray-led faction of Shiv Sena, the Bombay High Court has allowed them to hold Dussehra rally at the Shivaji Park on 5 October. It has also given them permission to use the park for preparations from 2 October.

A division bench of Justices R D Dhanuka and Kamal Khata heard the petition on Friday and set aside BMC’s order refusing permission and directed the civic body to grant permission from 2-6 October.

Earlier, the Brihanmumbai Municipal Corporation (BMC) had denied permission to both the Uddhav Thackeray-led Shiv Sena and the rival faction led by Maharashtra Chief Minister Eknath Shinde to hold a Dussehra rally at the Shivaji Park ground citing law and order concerns. The dispute over the iconic venue was then moved to the Bombay High Court.

The Uddhav Thackeray faction maintained that it would hold the annual event at the Shivaji Park despite the denial of permission while accusing the BMC of following the BJP’s script.

The Shiv Sena, founded by Bal Thackeray, has been holding its annual Dussehra rally at the Shivaji Park since 1966 except for the last two years of the coronavirus pandemic, it said.

Deputy municipal commissioner (zone-2) in separate letters sent to the two factions on Wednesday denied them permission to use the ground in central Mumbai’s Dadar area.

In its letters rejecting the applications, the BMC cited remarks by the Shivaji Park police station that “if any one of the applicants is granted permission to hold the rally, this may create a serious problem of law and order in the sensitive area of Shivaji Park”.

How it all started

On 22 August, Anil Desai of the Thackeray-led Sena had applied to the BMC for permission for Shivaji Park. On 30 August, MLA Sada Sarvankar of the Shinde faction also made a similar application.

Following the BMC’s decision, the Bombay High Court on Thursday allowed the Thackeray-led Sena to amend its earlier petition so as to challenge the denial of permission. In the original petition, the Sena had sought a direction for the BMC to decide its application.

Sarvankar had also filed an application opposing the Thackeray-led Sena’s petition stating that who represents the “real Shiv Sena” was pending before the Supreme Court, hence, the high court should not hear or pass any directions on the present petition.

Senior Advocate Aspi Chinoy for Thackeray faction said that the question of the real Shiv Sena does not arise and claimed that Sarvankar had filed the intervention application to obfuscate the matter. “The commissioner accepts on the record that the permission is sought by Shiv Sena. The aim of this intervention application is that the issue here loses focus and becomes a political slugfest”, submitted Chinoy, reports Live Law.

A Combative India is Hitting Back Abroad – The Diplomat

Sudden spike in rabies cases a cause of concern for India, Health News, ET HealthWorld

Mohammed Shami Gets Back To Bowling After Recuperating From COVID-19