The China challenge is indeed serious, but the Biden administration’s strategy for addressing it so far has been lacking. 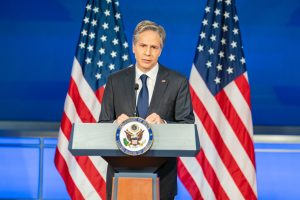 Secretary of State Antony J. Blinken delivers an address outlining the Administration’s policy toward the People’s Republic of China, at the George Washington University in Washington, D.C., on May 26, 2022.

U.S. Secretary of State Antony J. Blinken, in a major policy speech last Thursday, outlined the Biden administration’s strategy on China. “President Biden believes this decade will be decisive,” Blinken said, acknowledging that China, not Russia, constitutes “the most serious long-term challenge to the international order.” Blinken laid out the three pillars of the administration’s strategy: invest in American competitiveness and innovation, align U.S. efforts with allies and partners, and compete with Beijing to defend American interests and safeguard the rules-based order.

The China challenge is, indeed, serious but the Biden administration’s strategy for addressing it is lacking. There is no strategy – at least no credible strategy – without robust economic statecraft.

In his speech, Blinken touted last week’s launch of the U.S.-led Indo-Pacific Economic Framework for Prosperity (IPEF), boldly claiming the 13-country partnership to address concerns around supply-chain resilience, infrastructure and clean energy, tax and anti-corruption, and rules and regulations for digital trade “renews American economic leadership but adapts it for the 21st century.”

The framework is notable for what it is not – a free-trade deal. In a region where many countries value economic cooperation more than traditional security cooperation and count China as their largest trading partner, the United States should make free trade the linchpin of the American Indo-Pacific strategy. As former Secretary of State John Kerry often said, “Foreign policy is economic policy, and economic policy is foreign policy” in the Indo-Pacific.

This point has not been lost on the Biden administration. White House Indo-Pacific Coordinator Kurt Campbell openly acknowledged that the United States is competing with not one or even two hands tied behind its back, but “maybe one foot tied back there as well.” He called on the United States to “step up its game” on economic engagement with countries in the Indo-Pacific, making this approach a defining element of U.S. strategy in the region.

Despite Campbell’s sober assessment, the China strategy’s economic offerings fall short of the challenge. The joint statement launching the IPEF was notable for its lack of detail, referring vaguely to “collective discussions toward negotiations.” The administration previously indicated that framework would be nonbinding and exclude trade (beyond the digital domain) and investment liberalization.

Washington needs to get back in the trade game if it wants give countries in the region incentives to counter Chinese influence. Although the United States has either withdrawn or abstained from the region’s major trade agreements – the Regional Comprehensive Economic Partnership (RCEP) and the Comprehensive and Progressive Trans-Pacific Partnership (CPTPP) – China is already a member of the former and has applied to join the latter.

The Biden administration knows that it needs a regional trade agenda, but is paralyzed by its promise of a foreign policy for the middle class. With many working-class Americans feeling left behind in a globalized economy, and midterm elections looming, Biden may well feel that his hands are politically tied in negotiating new trade deals. The IPEF tries to thread a difficult political needle between American free-trade skepticism and American national security interests, but the result is unsatisfying.

If China is indeed the threat to U.S. national security interests that some claim, the American public will need to make sacrifices to counter it. But forgoing expanded free trade with Asia is not one of them. In 2016, the Peterson Institute for International Economics estimated that joining the Trans-Pacific Partnership (TPP), the forerunner to CPTPP, would increase annual real incomes in the United States by $131 billion, or 0.5 percent of U.S. gross domestic product (GDP). Politicians may rail against free trade for costing American jobs, but economists have shown that technology – not free trade – is mainly to blame. Moreover, most Americans view free trade as an opportunity for economic growth, suggesting that fears of a domestic political backlash may be overblown.

Most important, the Biden administration cannot compete with China and expect to succeed without a robust free trade policy. The White House needs to work out a more credible trade policy. Otherwise, it risks reinforcing regional impressions that the United States is not a reliable and committed economic player in the region.

Ladakh stand-off: India, China agree to hold next round of military talks soon