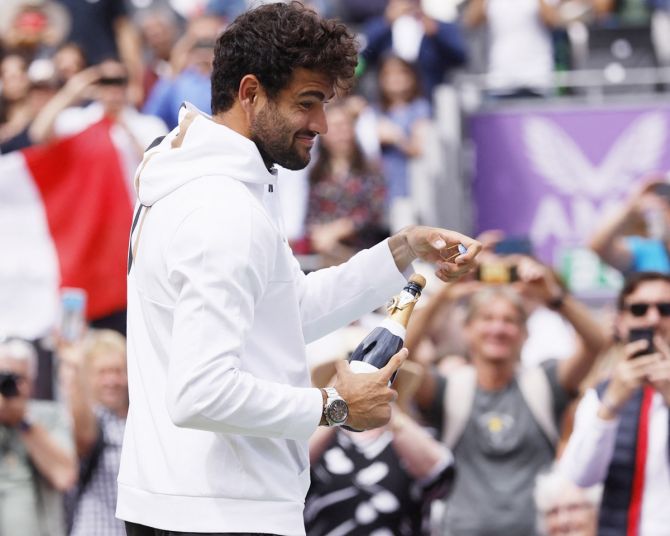 IMAGE: Matteo Berrettini, the 2021 Wimbledon runner-up, is out of this year’s tournament. Photograph: Andrew Couldridge/Reuters

Eighth seed Matteo Berrettini, runner-up at last year’s Wimbledon, became the second top player to pull out of the Championships after testing positive for COVID-19.

The 26-year-old Italian, who lost to Novak Djokovic in the 2021 final, withdrew from this year’s grasscourt Grand Slam on Tuesday due to the coronavirus a day after Croatian Marin Cilic, the 2017 runner-up, was forced to pull out.

“I am heartbroken to announce that I need to withdraw from @wimbledon due to a positive COVID-19 test result,” Berrettini said on Instagram hours before his first-round match against Chile’s Cristian Garin.

“I have had flu symptoms and been isolating the last few days. Despite symptoms not being severe, I decided it was important to take another test this morning to protect the health and safety of my fellow competitors and everyone else involved in the tournament.”

Berrettini was seen as a leading contender to win this year’s tournament after he claimed back-to-back titles in tuneup events on grass at Stuttgart and Queen’s Club.

“I have no words to describe the extreme disappointment I feel,” the Italian added.

“The dream is over for this year, but I will be back stronger.”

The pandemic forced organisers to cancel the 2020 Wimbledon tournament but no COVID-19 restrictions are in place this year and vaccination is not mandatory for players to participate.

The All England Club has also welcomed back full capacity crowds.

“As a major event we have and continue to work in conjunction with the United Kingdom Public Health Security Agency and our Local Authority,” a club spokesperson said in a statement.

“We have maintained enhanced cleaning and hand sanitising operations, and offer full medical support for anyone feeling unwell. We are following UK guidance around assessment and isolation of any potential infectious disease.

“Our player medical team also continue to wear face masks for any consultation.”

Cilic pulls out of Wimbledon after testing positive for COVID-19

Former finalist Marin Cilic pulled out of Wimbledon after testing positive for COVID-19, the Croatian said on Monday.

The 33-year-old Cilic, who won the US Open in 2014, reached the final of the grasscourt Grand Slam five years ago when he lost to Roger Federer.

“Hey guys, I am sad to share that I tested positive for COVID,” he said on his Instagram account, adding that he was “heartbroken” to see his season on grass end due to illness.

“I have been self-isolating and was hopeful I would be ready but unfortunately I am still feeling unwell and unable to compete at my best.”

Cilic, who had been seeded 14th, came to Wimbledon in strong form, having reached the semi-finals at the French Open and also making the last four of the ATP 500 tournament on grass at Queen’s this month.

He would be replaced by lucky loser Nuno Borges of Portugal in the men’s singles draw, Wimbledon organisers said.