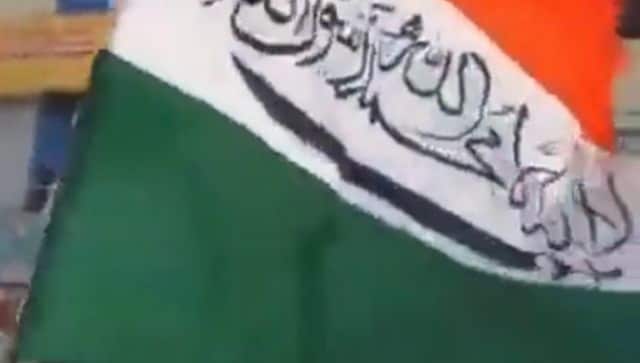 Amid pan-India protests against the controversial remarks by suspended BJP spokesperson Nupur Sharma on Prophet Muhammad, few protestors were seen carrying a national flag in which the revered Ashok Chakra was replaced with ‘Kalma’ in Telangana’s Mahabubnagar district.

The protest was held outside Masjide Rahmath in Mahabubnagar. Around 15-200 protestors gathered outside the mosque after the Friday prayers, Times Now reported.

In Telangana the #AshokChakra has been replaced with the words ‘there is no God but AIIah’.

Will those responsible for this be punished severely?

If not then it proves that anarchy has unleashed in India & rule of law doesn’t exist.#FridayFury pic.twitter.com/80vHTBihfW

In a viral video, a protestor can be seen waving a tricolor with ‘Kalma’ in place of Ashok Chakra.

The report further stated that the video has not been verified by the police yet. On Friday, massive protests emerged in multiple cities across the nation against Nupur Sharma.

In some places like Jharkhand’s capital Ranchi, the crowd began pelting stones, while in Uttar Pradesh’s Prayagraj, a top police officer’s vehicle was damaged as situation turned violent.

A large group of women carried out a protest march in Maharashtra’s Navi Mumbai. Demonstrations were also held in Solapur.

In the national capital, hundreds of people gathered at Delhi’s iconic Jama Masjid on Friday. They demanded the arrest of Nupur Sharma who was suspended as the BJP spokesperson for her controversial remarks on the Prophet Muhammad during a TV debate last month.

The row over the alleged derogatory remarks against Prophet Mohammad escalated after protests from countries like Saudi Arabia, Kuwait, Qatar and Iran, prompting the BJP to take action against its functionaries and assert that it respects all religions. As the row intensified domestically and abroad, the BJP on Sunday suspended Nupur Sharma and expelled Jindal.

The two FIRs were registered on Wednesday after a social media analysis, the police officials had said. Former Delhi BJP media unit head Naveen Kumar Jindal, who was expelled from the party over his alleged remarks against Prophet Mohammad, and journalist Saba Naqvi have been named in the FIR.