Actor Anushka Sharma on Monday took to Instagram to share a new selfie with her husband, cricketer Virat Kohli, on the eve of their daughter Vamika‘s first birthday. It looks like the celebrity couple called it an early night, which is probably tied to Vamika’s bedtime.

Anushka shared the selfie on Instagram Stories. It showed her and Virat cuddling with each other; she was wearing a black sweatshirt with the hood pulled up, and he was wearing a Team India jacket over his T-shirt. “Who goes to bed at 9:30?” Anushka asked in the caption. She is currently in South Africa with Virat and the team. 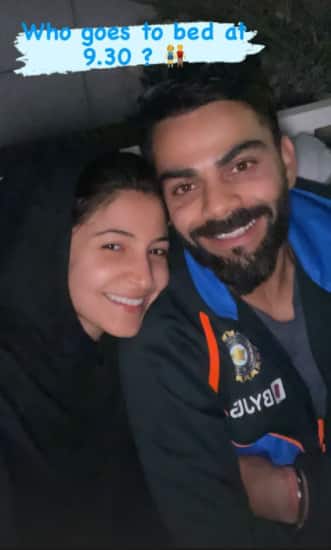 On January 11, Vamika turns one. The couple has decided to not reveal her face to the public until she is old enough to make her own decisions about social media. Anushka and Virat have also requested the media to refrain from publishing unauthorised pictures of her, an ask that has been largely adhered to.

They have, however, shared numerous pictures with Vamika, but with her face strategically obscured. In a recent interview with Grazia, the actor spoke about her daughter’s personality. “I find her extremely determined. I feel that if she wants to do something then she’s going to do it, and I can tell that it’s going to serve some purpose for her in life. It’s nice to see that because I think I was like that too,” she said.

After a four-year acting sabbatical during which she became a mother and attempted to reconnect to her creative side, Anushka recently announced her comeback project–the cricket biopic Chakda ‘Xpress. Based on the underdog story of the Indian women’s cricket team, the film will arrive on Netflix and will feature Anushka as the fast bowler Jhulan Goswami. Anushka has remained busy as a producer; her Clean Slate Filmz banner released the Amazon Prime Video hit Paatal Lok, as well as the Netflix film Bulbbul. She is also co-producing Qala, the debut film of Irrfan Khan’s son Babil.