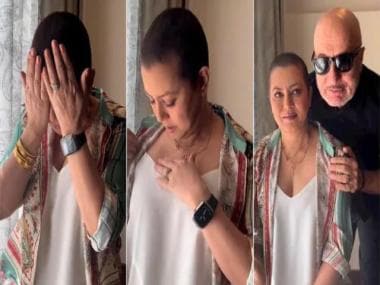 Actor Anupam Kher disclosed about Mahima Chaudhary’s fight against breast cancer and called her a hero. The two will be seen together in Anupam’s 525th project titled The Signature.

Anupam Kher shared a moving video of Mahima Chaudhary fighting breast cancer and defeating the odds earlier today. Mahima confirmed to ETimes that she has begun filming her next feature, The Signature, with Anupam and Annu Kapoor, in Lucknow.

Revealing details of her upcoming project, Mahima said, “I’m shooting for The Signature with Anupam Kher and Annu Kapoor. It’s directed by Marathi filmmaker Gajendra Ahire. I’m on set in Lucknow right now. Today I will have to finish all my scenes, as tomorrow I fly to Mumbai for my daughter Ariana’s birthday.”

Anupam Kher’s video took everyone off guard, and Mahima claimed that not only her followers and well-wishers were unaware of the situation, but neither were her parents. She said, “I haven’t shared my diagnosis with my parents. They will hear about it on the news now. I want to get back and be with them.” Mahima also gave us an update on her recovery. She revealed, “I have made a full recovery and I just need all the love and support to get going again.”

Mahima also thanked Anupam Kher in her Instagram post. She added, “Anupam has been such an angel in my journey. I bless him. It takes a fantastic heart to be the great actor he is. He’s an outstanding human being, too.”

The Signature is a story about a normal man, and Kher has been routinely updating his social media with updates from the film’s shot and development. His video with Mahima this morning also served as a public announcement that Mahima had returned to work and was open to new opportunities.

India pushes for projects in Sri Lanka instead of more credit lines: Report