Rohit Shetty’s Sooryavanshi is up for a release after a long wait. The Akshay Kumar-Katrina Kaif starrer, which was originally intended for a release in March 2020, will finally see the light of the day on November 5. As we already know, Sooryavanshi is the third part of Rohit Shetty’s cop universe which started with Ajay Devgn’s Singham, followed up by Singham Returns and trailed by Ranveer Singh’s Simmba. As Sooryavanshi is all set to land, here’s looking at what makes this cop universe such an exciting affair, and why do we keep going back for more? Here’s examining the previous films of the universe and what makes/does not make them click. With Sooryavanshi, the concept of a shared universe has been brought to mainstream Hindi cinema.

Rohit Shetty has always been a man with a midas touch. Most of his films deliver on the box office, and are often loved by his fans so there is certainly a secret sauce that Shetty adds in his movies that makes them more appealing than the other run-of-the-mill masala adventures. When Rohit Shetty came out with Ajay Devgn starrer Singham in 2011, he already had the successful Golmaal franchise behind him. Rohit had developed a penchant for giving us popping colours on screen that promised joy and his style of comedy had already found its groove with the masses.

So when Singham came along, it highlighted the strongest weapon in Rohit’s arsenal – action. At the time, Singham followed on the heels of Dabangg so it felt like another cop drama where everyone was going over the top but ten years later, it is evident that Singham had that distinctive quality that pleases the masses yet does not feel stupid. Casting Prakash Raj as the villainous Jaikant Shikre was a masterstroke but what won the day here was its epic stunt sequences – especially the one where Singham rescues Gotya’s daughter and rips a man out of that flying Bolero. Ajay Devgn in and as Singham was the start of this cop universe.

Singham Returns, but did he really need to?

Now that this is a fully established universe, the question sounds moot but did we really need a Singham Returns? Out of the many action adventures that Shetty has directed, Singham Returns wasn’t probably his finest hour. The film brought Ajay and Rohit back together, soon after the success of Shah Rukh Khan-Deepika Padukone starrer Chennai Express.

As much as the audience loves mainstream cinema, and appreciates it for its genre – Singham Returns did not feel as honest as its predecessor. The only element that won the day here was Ajay’s Singham yelling out ‘Daya, darwaza tod do’ at a crucial moment in the film because casting Dayanand Shetty and making his character’s name Daya would have been worthless if this dialogue wasn’t a part of the film.

By the time Simmba released in 2018, Rohit Shetty was a bonafide hitmaker who hardly ever missed a beat and Simmba was another jewel in his crown. Casting Ranveer Singh as the dishonest cop who has a change of heart was just brilliant as the role was tailor-made for the talented actor. Hindi movies don’t usually do villains like they once did – with menacing names, but Rohit brought it back with Sonu Sood’s Durva Ranade.

Simmba combined comedy and action in a way that brought the best of Rohit’s two worlds together but what won the day here was Ajay Devgn’s Singham entering the climax in a jaw-dropping fight sequence that we are glad was kept under wraps. 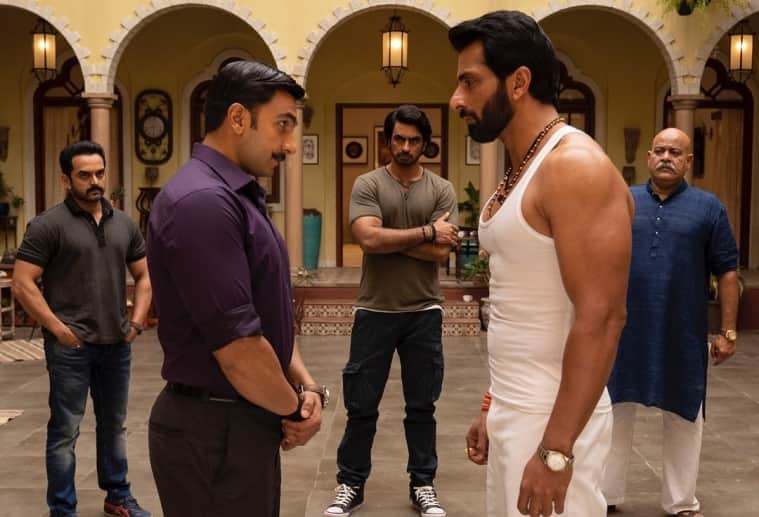 Sonu Sood’s villain Durva Ranade was one of the best parts of Simmba.

Establishing a shared universe that has cops with ‘devil-may-care’ attitude certainly has problems that are casually ignored in Shetty’s world of films but it is not the job of mainstream filmmakers to depict a morally upright society. They lure us into the theatre with a promise of entertainment, and so far Shetty has delivered on that promise on multiple occasions. Here’s hoping, Sooryavanshi doesn’t break his streak.