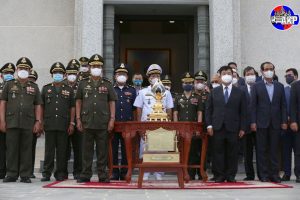 Cambodian military and civilian officials enshrine the country’s first drop of oil at the Win-Win Monument in Phnom Penh, June 9, 2021.

Cambodia’s government is seeking the return of an oil tanker that has been detained by the Indonesian Navy, alleging that the ship is carrying stolen crude oil, a spokesperson for Cambodia’s Ministry of Mines and Energy said yesterday.

On Wednesday, the Indonesian navy announced that it had taken into custody the Bahamian-flagged tanker MT Strovolos, which Cambodia claims is carrying nearly 300,000 barrels of crude from a recently collapsed offshore oil venture.

The ship, its Bangladeshi captain, and 19 crew members were detained by a patrol boat on July 27 in waters off Sumatra island, a few days after Phnom Penh issued a red notice on Interpol demanding the seizure of the ship, the Indonesian Navy said in a statement.

“I am worried,” spokesperson Cheap Suor said, according to Reuters. “We have already requested (for) a long time to send them back, the oil, the vessel and the crew who stole it, and left without permission from the Cambodian authorities.”

According to the Indonesian statement, the navy is preparing to charge the captain of the ship for loading oil illegally in Cambodia and anchoring it in Indonesian waters without permission. He faces a year in prison and a fine of up to 200 million rupiah ($13,800) if convicted.

The tanker affair has provided an abrupt bookend to Cambodia’s long-cherished goal of extracting oil from its waters in the Gulf of Thailand. Late last year, Prime Minister Hun Sen announced the first extraction of oil with great fanfare, and the first drops of crude were ceremonially installed at a monument outside the capital Phnom Penh.

But in early June, the scheme collapsed when its Singaporean partner KrisEnergy filed for liquidation due to unsustainable debt levels, which were at least partly a result of the lower-than-expected yields from the Cambodian oil field. “On December 29, we announced the first drop of oil – perhaps now it is a failure,” Hun Sen admitted in a speech at the start of this month.

In the speech, Hun Sen also alluded to the scampering of the MT Strovolos, saying that it had departed for Thai waters with the small amount of crude that had been extracted prior to KrisEnergy’s collapse. “We couldn’t prevent it on time,” Hun Sen said of the ship’s departure. “They ran away with the oil.” After reportedly spending some time in Thai waters, the vessel departed for Indonesia.

As per Reuters, World Tankers Management, the Singapore-based operator of the detained MT Strovolos, has denied that the oil was loaded illegally and rejected the claim that it did not have permission to anchor in Indonesian waters. According to the firm, KrisEnergy, which bought a controlling stake in the Cambodian oil field from the U.S. based oil giant Chevron in 2014, defaulted on payment and failed to supply fuel to the ship. It added that the vessel also had to carry out a crew change as most of the staff had been onboard since September 2020.

As I’ve noted before, oil and gas production has had an outsized symbolic significance for Hun Sen’s government, as a sign of the country’s emergence from decades of war and upheaval. The government was also set to bring in some $500 million from the first phase of the project, money that would have further decreased its reliance on both Western aid money and Chinese government largess.

Now, the Cambodian government faces a probable legal battle to regain possession of the 300,000 barrels of crude, which could end up being all that remains of its offshore oil ambitions.

Leo Folks Need To Make Good Use Of Free Time; Know About Other Signs