A Duterte Dynasty in the Philippines? – The Diplomat 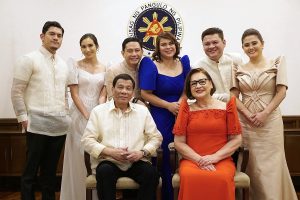 President Rodrigo Roa Duterte poses for a photo with the first family after delivering his third State of the Nation Address at the Session Hall of the House of Representatives Complex in Constitution Hills, Quezon City on July 23, 2018. Sara Duterte is in blue.

The Diplomat author Mercy Kuo regularly engages subject-matter experts, policy practitioners, and strategic thinkers across the globe for their diverse insights into U.S. Asia policy. This conversation with Dr. Aries Arugay – visiting fellow at the ISEAS Yusof-Ishak Institute and professor of political science at the University of the Philippines Diliman – is the 294th in “The Trans-Pacific View Insight Series.”

How is Philippine President Rodrigo Duterte pursuing a Putinesque power play to ensure he remains in leadership long term?

A Philippine president can only serve a single-term of six-years in his lifetime. This is the main obstacle to Duterte in order for him to perpetuate himself and his allies in power at the most, or escape accountability at the least. In his calculation, his continuation is best served by running as vice president in order to at least be protected from possible political attacks. However, the Philippine political system does not provide any formal power to the vice president apart from political succession. Its electoral rules also allow vote-splitting (unlike in the U.S.) which means there is a likelihood that even if Duterte wins as vice president, the winning president might come from the opposition or outside his coalition.

Thus far, Duterte has not formally filed his candidacy for vice president but he can still take advantage of the window provided by electoral rules as a substitute candidate of his party until November 15, 2021.

In the Philippines, politics is “all in the family.” Our weak party system allows dynastic succession as we have had a few presidents who are the spawn of their parents who also served the presidency. Sara Duterte is the most likely choice to succeed her father not only because of her pedigree but because of the solid political base she has built in the southern part of the Philippines, considered as their family’s political bailiwick. While President Duterte has dissuaded his daughter from running as chief executive, many see this as just a strategy to downplay their family’s political ambitions. A Sara Duterte presidency will also mean that her father will likely be the power “behind the throne.”

Evaluate Sara Duterte’s bona fides as a presidential contender. Beyond name recognition, can she hold her own?

Despite lacking in national political experience, Sara Duterte has developed a following from Filipino politicians and cultivated a mass base in Mindanao. In the 2019 elections, she headed Hugpong ng Pagbabago (Group for Change), a regional political party that successfully placed several politicians in the country’s nationally-elected Senate. She has displayed a modicum of independence from her father by disagreeing with some of the officials from her father’s cabinet and the administration party. In fact, her negative disposition toward her father’s party is seen by many as an indication of her ability to get out of her father’s shadow and exercise a degree of relative autonomy from the incumbent administration.

Since 2016, the Dutertes remain the dominant force in Philippine politics. The weakness of the opposition is clearly seen in the performance of some of its leaders in electoral surveys. The current Vice President Leni Robreado trails behind other politicians who used to be former allies of Duterte, notably globally recognized boxer-turned-politician Manny Pacquiao. The current Manila mayor, Isko Moreno, has also been highly favored in early polling as an alternative to Duterte given his track record of good local governance in the country’s capital. Lastly, the son and namesake of the country’s former dictator Ferdinand Marcos is also running. Bongbong Marcos placed second to Sara Duterte in the surveys, though many still believed that the alliance between these two dynastic successors remains strong.

Describe how Sara Duterte might manage the Philippines’ relations with the United States. If she ascends to the presidency, how would Manila recalibrate relations with Washington?

The Philippines’ relations with the U.S. have gradually improved this year with Defense Secretary Lloyd Austin’s visit to Manila and the fact that Duterte has committed not to abrogate the country’s Visiting Forces Agreement with the U.S. However, many still worry that President Duterte might jeopardize the alliance during the remainder of his term. Sara Duterte is seen by many as an opportunity to “reboot” the Philippines-U.S. alliance as she will likely articulate a different policy from her father just in case she becomes president. Given her noninvolvement in her father’s administration, she does not have the negative fallout from the anti-U.S. policy rhetoric of her father. However, she still has to balance a new U.S. policy with her father’s accommodationist China policy given that Sara has also cultivated good relations with China.

Cambodia Opposition Fractures as Bickering Breaks Into the Open – The Diplomat

obama: "We're nowhere near where we need to be" on tackling climate change: Barack Obama

The Challenges Ahead for Japan’s Kishida Government – The Diplomat