(China Daily) The total box office of Chinese films this year has exceeded 46 billion yuan ($7.2 billion), more than twice that of last year (20 billion yuan). There are obvious signs of recovery, but it is still far from the peak of 64.2 billion yuan in 2019.

The Battle at Lake Changjin and Hi, Mom both have box office returns of more than 5 billion yuan, taking the top two places in the global annual box office. Among them, the former has exceeded 5.7 billion yuan, breaking the box office record held by Wolf Warrior Ⅱ for four years, once again creating a milestone in the domestic box office.
Here are more details on the top 10 earning films in China in 2021. 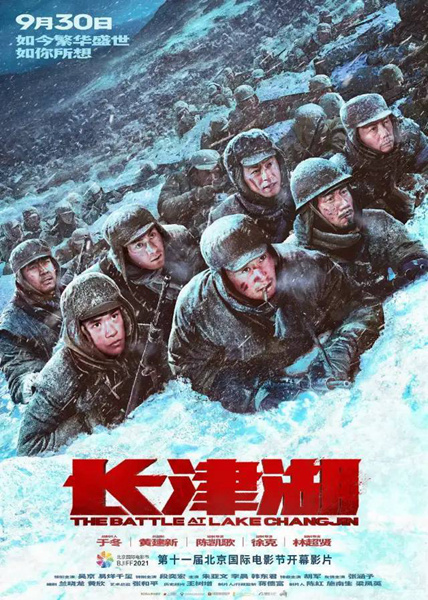 No. 1: The Battle at Lake Changjin, 5.74 billion yuan (still playing)
Genre: History, war
Directors: Chen Kaige, Tsui Hark and Lin Chaoxian
Synopsis: The film is set during the War to Resist US Aggression and Aid Korea (1950-1953) and tells the story of Chinese People’s Volunteers soldiers fighting bravely in freezing temperatures in a key campaign at Lake Changjin, or Chosin Reservoir. In an extremely cold environment, the eastern battle force of soldiers reversed the situation and made an important contribution to victory at Changjin Lake.
Data source: People’s Daily, Douban, MaoYan Movie 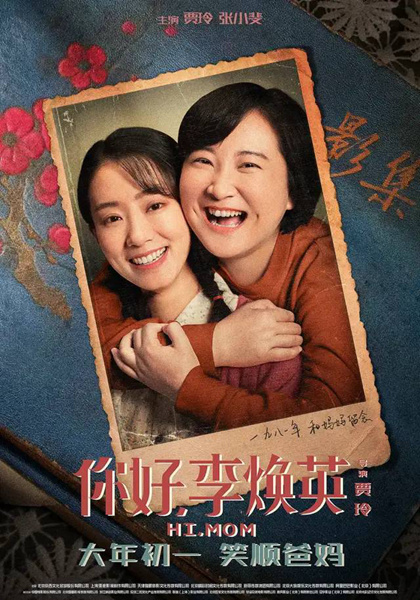 No. 2: Hi, Mom, 5.41 billion yuan
Genre: Fantasy, comedy, family
Director: Jia Ling
Synopsis: Based on a sketch of the same name in 2016 and Jia Ling’s personal experience, the film tells the story of how Jia Xiaoling, a girl who has just entered college, experiences dramatic changes in her life and loses control of her emotions. Jia then accidentally travels back to the 1980s and meets her young mother Li Huanying 20 years before her birth. 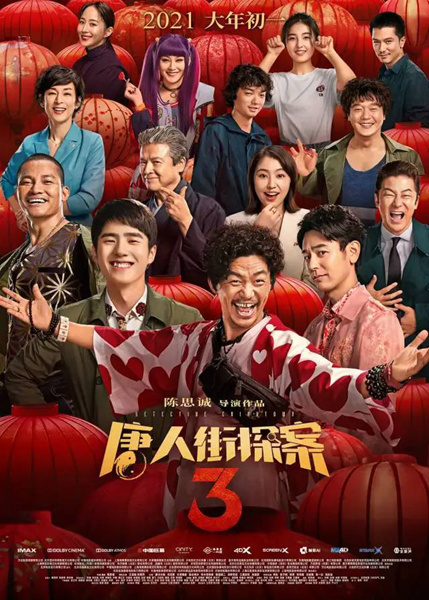 No. 3: Detective Chinatown 3, 4.51 billion yuan
Genre: Action, mystery, comedy
Director: Chen Sicheng
Synopsis: The film tells the story of Tang Ren and Qin Feng after they were invited to Tokyo by Noda Hao to investigate a bizarre murder case. 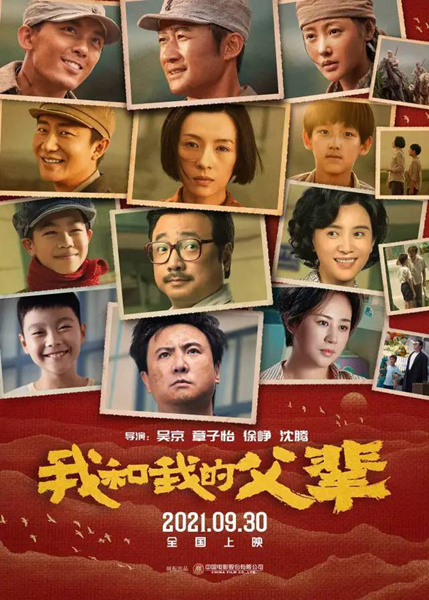 No. 4: My Country, My Parents, 1.47 billion yuan
Genre: Feature
Directors: Wu Jing, Zhang Ziyi, Xu Zheng and Shen Teng
Synopsis: The film takes revolution, construction, reform and opening-up and the new era as the timeline and describes the experiences of several generations of parents. The film shares the bonds and spiritual inheritance of the Chinese people, and reproduces memories of their hard work. 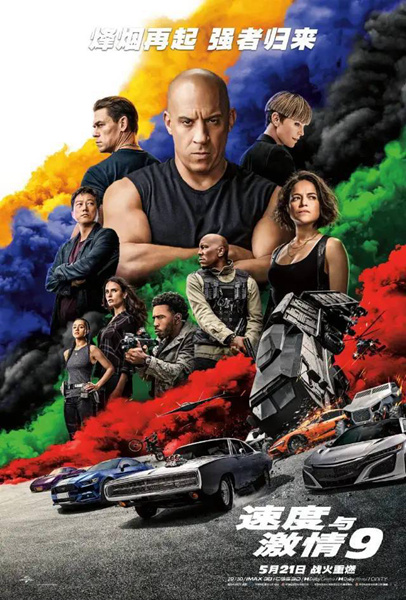 No. 5: F9: The Fast Saga (Fast & Furious 9), 1.39 billion yuan
Genre: Action, feature, crime
Director: Justin Lin
Synopsis: The film tells the story of Dominic Toretto and Letty Ortiz coming out of retirement again at the invitation of their friends, meeting their long-lost brothers and taking the fight to space. 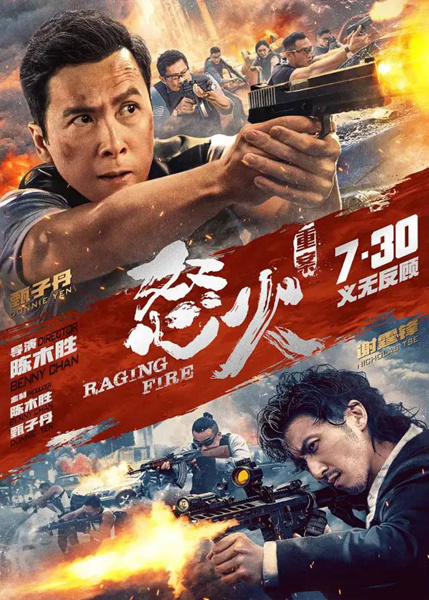 No. 6: Raging Fire, 1.32 billion yuan
Type: Action, crime
Director: Benny Chan
Synopsis: Inspector Zhang Chongbang saw his comrade-in-arms killed in the process of encircling and suppressing international drug lords. However, after in-depth investigation, it was found the leader of the bandit was his former comrade and their entangled fate was the source of the conflict. 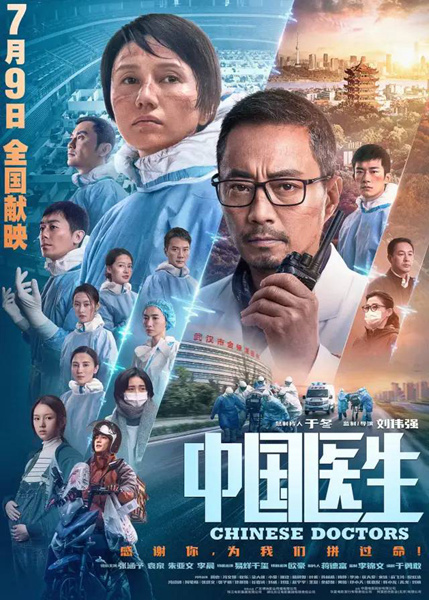 No. 7: Chinese Doctors, 1.32 billion yuan
Genre: Medical treatment, anti-epidemic
Director: Liu Weiqiang
Synopsis: The story is based on real events of the novel coronavirus pandemic in 2020. It is a story of medical staff in China who risked their own safety to come forward to fight COVID-19 on the frontlines in Wuhan. No. 8: Godzilla vs Kong, 1.23 billion yuan
Genre: Action, disaster, adventure
Director: Adam Wingard
Synopsis: The film tells a story of a human plan to erase all giants from the earth, designing Godzilla and King Kong to duel. At last, the two giants work together to destroy human’s plan. 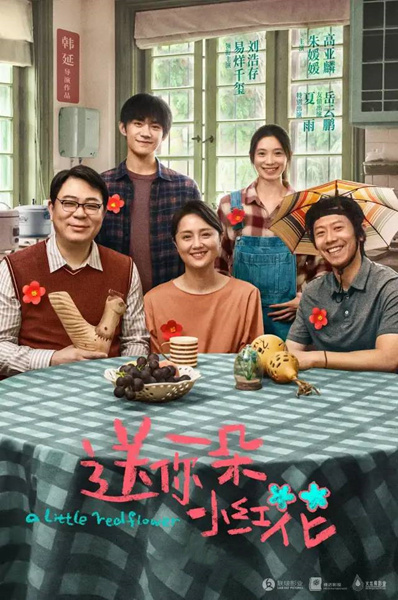 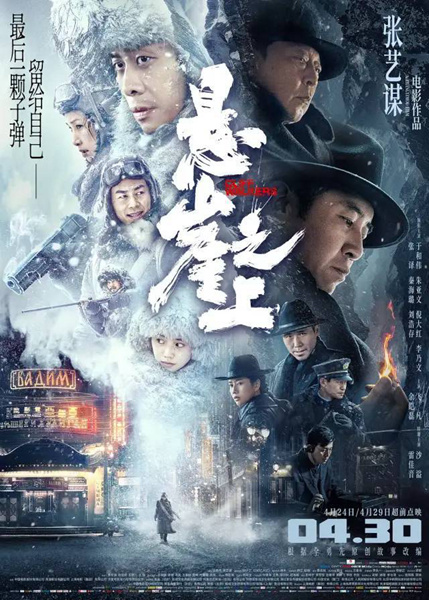 No. 10: Impasse, 1.19 billion yuan
Genre: Feature, action, mystery
Director: Zhang Yimou
Synopsis: In the 1930s, four Communist agents who had received special training in the Soviet Union formed a team and returned home to carry out a secret operation codenamed “Vthra”. Betrayed by traitors, they were caught in a trap laid by the enemy from the moment they parachuted and landed. Whether the comrades can get away or complete their task, the team faces a severe test.
Source: By Fu Rui | chinadaily.com.cn | Updated: 2022-01-05 10:21

81% in the 18+ group fully vaccinated in Kerala: Minister