104-year-old woman scores 89 out of 100 on literacy test; netizens applaud her determination

Kuttiyamma had never attended school and recently began attending Saksharatha classes. She was taught to read and write in Malayalam by her teachers, and can now read a newspaper and write letters as well 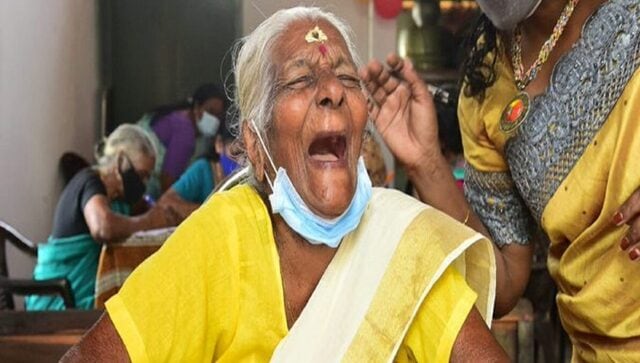 Kuttiyamma, 104, from Kerala’s Kottayam scored 89 out of 100 in the Kerala State Literacy Mission’s Test. News18 Hindi

Time and again, one comes across examples in life which prove that age is no barrier if one is determined enough. Such is the case of 104-year-old Kuttiyamma from Kerala’s Kottayam. By scoring 89 out of 100 on the Kerala State Literacy Mission’s Test, the woman has shown that age is just a number.

The news of Kuttiyamma’s achievements spread across social media when the state education minister, V Sivankutty, took to Twitter to celebrate the 104-year-old’s milestone. Writing that “age was no barrier to knowledge”. Sivankutty said that he wished Kuttiyamma and other learners best of luck for their future endeavours.

104-year-old Kuttiyamma from Kottayam has scored 89/100 in the Kerala State Literacy Mission’s test. Age is no barrier to enter the world of knowledge. With utmost respect and love, I wish Kuttiyamma and all other new learners the best. #Literacy pic.twitter.com/pB5Fj9LYd9

Several social media users praised the 104-year-old learner for her passion towards education and saluted her spirit. Many hoped that Kuttiyamma would continue to inspire people across generations, while several social media users were inspired by her dedication towards her studies. A few users even admitted that her story motivated them to continue their own studies. Some felt that the 104-year-old woman’s achievements proved that sheer willpower can help you achieve any milestone.

Kuttiyamma had never attended school in her childhood. Recently, she began attending Saksharatha classes held by the state. She was taught to read and write in Malayalam by her teachers, and can now read a newspaper and write letters as well, according to ANI.

Following her astounding performance in the literacy test, Kuttiyamma is now eligible to appear for Class 4. The 104-year-old’s educational milestone adds another feather in the cap of Kerala, which is the most literate state in the country with a literacy rate of 96.2 percent, according to the 2011 census. As per the census date, almost 92.07 percent of females and 96.11 percent of males in the state were literate.

The Kerala State Literacy Mission Authority aims to promote lifelong learning and literacy for all citizens in the state. The organisation currently provides equivalency programmes for various grades including classes 4, 7, 10 and 12.

Are Acid Reflux and Gas Different? How to Get Rid of Them